Barbara Fox earned her BFA in fine and studio arts from the University of California, Davis, and currently works as an illustrator with her own studio. Her previous clients include the likes of Disney, the Franklin Mint, and Timex. Fox also imparts her techniques to the next generation by working as a teacher in watercolor painting all over the country. A designer in the Mint’s Artists Infusion Program (AIP), she has worked on multiple high-profile numismatic projects such as the Code Talkers Recognition Congressional Medals Program, the 5-Star Generals Commemorative Coin Program, and the First Spouse Gold Coin and Medal Program. Fox currently lives in upstate New York and continues to be an active contributor to the designs of many numismatic and artistic projects.

Ellis Island lies partly in New York, partly in New Jersey. Speaking with her local newspaper, the Little Valley Post-Journal, Fox pointed out that the main building is in the New York section; for the quarter, she chose the hospital building, which is in the New Jersey section. “These people were leaving everything they knew behind,” she told the newspaper:

Chances were they would never go back to their country. They were making a whole new life in a place they had never been before… They didn’t speak the language and didn’t know the customs. Chances are they knew nothing about the U.S. except what they had been told. They used to call Ellis Island the “Island of Hope” and “Island of Tears” because people were very hopeful about coming to the United States. Part of the hospital facilities at Ellis Island. This is the area depicted on the coin; note the brickwork, dormer windows, and chimneys. (Hover to zoom. Library of Congress photos.) 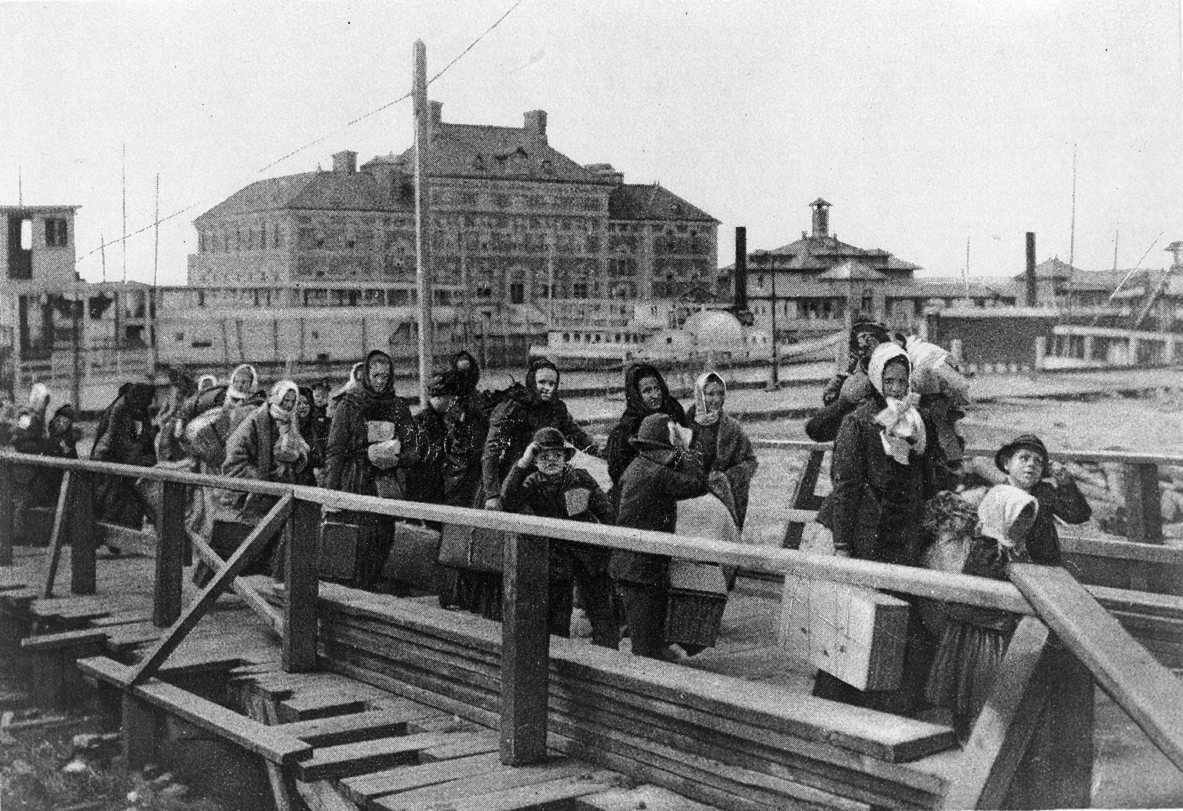 A 1902 photo of immigrants coming up the boardwalk from the barge, which has taken them off the steamship company’s docks and transported them to Ellis Island. The big building in the background is the new hospital, just opened. The ferry-boat seen in the middle of the picture ran from New York to Ellis Island.

Mint sculptor-engraver Phebe Hemphill perfected her craft of engraving at the Pennsylvania Academy of Fine Arts, where she studied with EvAngelos Frudakis. In 2006, she joined the U.S. Mint’s sculptor-engravers team, whereas before she had demonstrated a wide range of ability in various freelancing art projects ranging from medallions to toys. An interview with Hemphill about her work on the 2017 Ellis Island Quarters is available here.

While the finished product of the 2017 Ellis Island Quarters is the collective result of the toil of many people, the two who carry the lead torches are undoubtedly Barbara Fox and Phebe Hemphill. If you are interested in taking in Fox’s work first-hand at her Ellicottville art studio, she can be reached at her e-mail or by phone 699-4145. To learn more about the many numismatic projects credited to Phebe Hemphill, you can visit the website of the U.S. Mint.