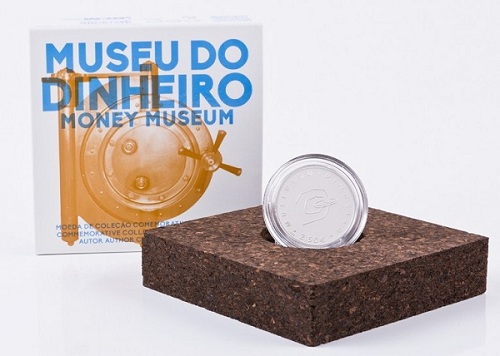 The Imprensa Nacional Casa da Moeda (INCM) has launched the issue of a new coin marking the inauguration of the Banco de Portugal’s Money Museum. This new purpose-renovated museum is located in the center of Lisbon in the former Church of St. Julian, which was originally built in 1810 and has been in the possession of the Banco de Portugal since 1930. The building went largely unused until now.

The premises blend the original baroque style with modern design and amenities, and have been wholly renovated to accommodate the Bank’s immense collection. The displays consist of coins, banknotes, instruments of currency, and bullion that have been organized in various departments and situated over four levels.

Of special interest is the display that includes remnants of the wall of King Dininz. The wall is classified as a national monument and is the only known remnant of Lisbon’s medieval wall, which was buried after a cataclysmic earthquake in 1755. The remnants of the King’s wall were recently unearthed during the renovation of the building and they are only on display at the new Money Museum.

The renovation is created by the designer Francisco Providência. The museum’s floor-plan is based on thematic rooms focusing on such subjects as pre-monetary currency, money throughout the world and its history over the centuries, banknote and coin production, and personal testimonies about the role of money in the lives of ordinary citizens.

The coin, produced in cupro-nickel and silver, is designed by Charters de Almeida with minimalism in mind. The obverse illustrates that the use of money is something we all have in common by depicting a coin held between two fingers during the simple act of exchange. On the reverse, a pattern of three circles are arranged in an uneven row, symbolizing coins moving on an empty space or counter.

The coin was released on April 19 and is produced in BU (Cupro-nickel) and Proof (sterling silver), which are available to purchase separately. The Bank of Portugal’s Money Museum officially opened to the public on April 20. For information on this and other coins offered by the INCM, please visit their Web site. More information on the Bank of Portugal’s new Money Museum is available here. International orders are dispatched where applicable.