The Bank of Greece and the marketing department of the collector coins division are very pleased to announce that a total of three of last year’s commemorative coins have been nominated in the Coin of the Year awards (COTY) in three different categories.

The outstanding designs of acclaimed artist – sculptor George Stamatopoulos and state-of-the-art production & overall quality of the coins produced by the Greek State Mint has been recognized by a panel of judges comprised of authors, editors and numismatists, as well as members of the American Numismatic Association and Citizens Coinage Advisory Committee. These judges met on the 4th October in Iola, Wisconsin USA to choose the following nominees from hundreds of suggestions received from around the world.   The coins nominated for this year’s awards were released in 2012 and the results were announced on the 18th October. The nominees, of which Greece has collected three nominations in separate categories – represent the highest achievement in theme, design and marketing from mints and central banks from around the world.

The categories in which the Greek State Mint and their coins are as follows: 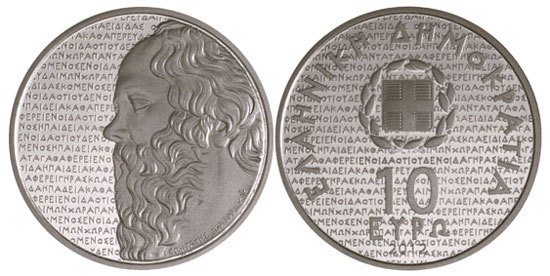 This coin was part of a two-coin issue and included a faithful rendition of the immortal philosopher on the obverse. His detailed profile portrait is facing to the left and positioned towards the right half of the coin with a background of Greek text attributed to Socrates. His name & year of birth and death as well as the Greek Mint’s mintmark are seen just to the base of the portrait. The reverse design includes the Greek crest which is positioned towards the upper half with the coin’s denomination of “10 EYPΩ” just underneath with the year of issue 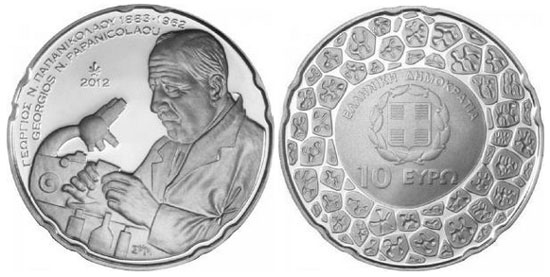 A Greek pioneer in cytopathology and early cancer detection,  Dr. Papanicolaou was the discoverer of the The Papanicolaou test, a screening test used to detect potentially pre-cancerous and cancerous processes in the endocervical canal of women. When combined with a regular program of screening and appropriate follow-up, this life-saving process can reduce cervical cancer deaths by up to 80%. The coin’s obverse design includes a faithful reproduction of Dr. Papanicolaou along with his microscope and the years of his birth and death. The reverse included renditions of the very cells he discovered as potentially life threatening placed around the Hellenic coat of arms which is positioned just to the center of the primary design. 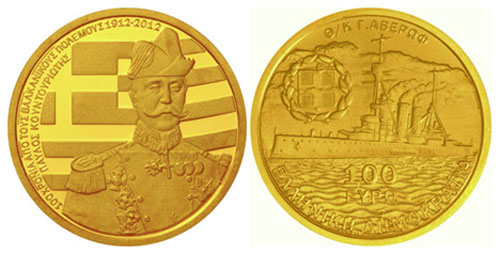 The Greek nation enthusiastically celebrated the centennial anniversary of the return of Salonika last year with ceremonies attended by the President of the Republic as well as many dignitaries – not just in Athens and Salonika but throughout the country. This coin was a fitting tribute to the struggle which Greece overcame one hundred years ago despite the many challenges to unify the peoples of the greek-speaking world under one flag and country. The coin includes a depiction of Admiral Kountouriotis in a front-facing portrait in full military uniform along with the Hellenic flag as a backdrop. The reverse includes a depiction of the Armoured Cruiser, the Georgios Averof (ΘΩΡΑΚΙΣΜΈΝΟ ΚΑΤΑΔΡΟΜΙΚΌ ΓΕΏΡΓΙΟΣ ΑΒΈΡΩΦ) built in 1911 and named after the well-known Greek benefactor of the late 19th century. The Hellenic coat of arms is positioned just to the upper left of the primary design.

These nominees will now be reviewed by a worldwide panel of judges comprised of mint and museum officials, journalists and individual experts. They will choose the winner in each of 10 individual categories. A second round of balloting will select the actual Coin of the Year from among the category winners. In this regard, it is possible that should one (or all) of the Greek coins win in their category, one may also be chosen as the outstanding Coin of the year.

It is the first time that three coins in three separate categories from Greece have been simultaneously nominated in the 31 year history of the COTY awards – the craftsmanship and attention to detail which the Greek state Mint excels in has been well & truly recognized by the nominations of these three coins and the Bank of Greece could not be more excited about their prospects and possible wins for 2014.

The COTY awards are sponsored by Krause Publications, a leading producer of coin and paper money books, magazines, events and online products. Each year, the COTY awards honor the best in coin design from around the world. The awards will be presented during a ceremony on the 8th February 2014 during the World Money Fair held in Berlin, Germany.

For more information on the current program and collection of coins offered by the Bank of Greece – collector coin division, please visit their website at: http://www.bankofgreece.gr/Pages/en/Euro/Notes-coins/Collectors/default.aspx Information is offered in both English and Greek – international orders fulfilled.