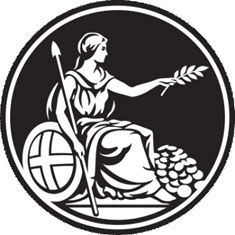 2012 has proven to be an extremely exciting and busy year for not only London but for the UK as a whole. With the Diamond Jubilee celebrations, Wimbledon has come to a memorable close, it’s now the turn of the Olympics to end & Paralympics to begin,which are just days away. If you’re going to be visiting the British capital either for the Olympics or just as part of your annual summer get-away and you want to take a break from all of the celebrations, be sure to make a point of stopping by the Bank of England Museum. If you’re traveling with younger collectors… don’t forget them, the Museum is very family-friendly.

Situated in one of the more historic districts of London – known as “the city” – the Bank is located on Threadneedle Street at the headquarters they have occupied since 1734. The present building itself was rebuilt during the early part of the 20th century as the Bank of England acquired further space on the street. The edifice faces the Royal Exchange and is on the corner of the “Bank Junction” 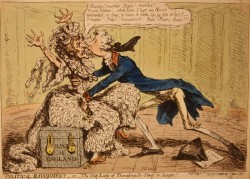 Legend has it that the ghost of Sarah Whitehead haunts the courtyard or gardens of the Bank and it was said that this legend gives the Bank of England its nickname of “The old Lady”. However, it is likely that the nickname stems from an entertaining cartoon first published as far back as 1797 depicting the Bank as an old woman dressed in a costume made of one pound notes.

Today, the Bank of England continues to issue banknotes as it has since it’s foundation in 1694 and also oversees the monetary policy of the United Kingdom, working closely with Her Majesty’s treasury. The Financial Policy Committee oversees policy of the country’s financial sector.

The Bank of England Museum opened to the public in 1988 and comprises more than 10,000 square feet of exhibition space. One of the most eye-catching displays in the main hall is a life-size reconstruction of the old stock office at it would have appeared in the late 18th century. The Museum has a comprehensive collection of banknotes, both British and worldwide, as well as a collection of many of the circulation and commemorative coins on display from the the Bank’s origins. A real “must-see” is of course the gold bar on display in the central chamber weighing 400-troy-ounces or 12.4 kg. (438.9 standard ounces) which you are welcome to “lift” with one hand while it’s protected in its lucite and glass case. Along with permanent interactive displays, an audio tour is also available for a fascinating insight and commentary into the Bank of yesterday and today. 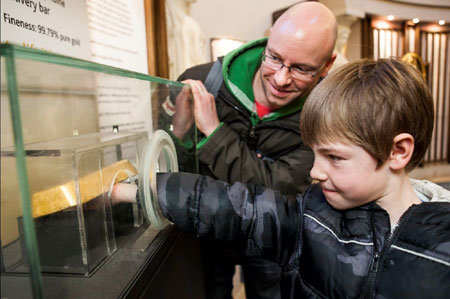 Currently, the Bank of England Museum is currently hosting:

In the year of the Olympic Games in the UK, when the ultimate accolade of gold is given to the best of the world’s athletes, this exhibition examines the part gold has played during the Bank’s long history and the Bank’s role in relation to gold today. 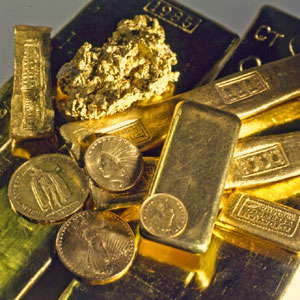 Visit our exhibition to learn about the Bank of England and gold – then make a gold-bar-shaped money box to take home. Enter our gold quiz competition with prizes to be won. There will be special lunchtime presentations about gold in the Museum cinema at 1:15pm. 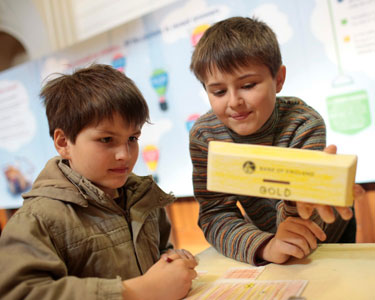 The Museum is open daily Monday to Friday 10:00am – 5:00pm unless indicated. The Bank of England Museum is closed on Public and Bank Holidays, and weekends except where indicated.* Entrance is to the right side of the main building (Bartholomew Lane, London EC2R 8AH) with wheelchair access available. Visit the Museum shop, which offers a range of gifts, publications & souvenirs to suit all budgets. Nearest underground stop: Bank on the central line. Admission and events are free!

For more information or to “know before you go” please visit the Museum’s website at: www.bankofengland.co.uk/museum

For collectors of banknotes, be sure to keep your eye out for the two series of banknotes currently in circulation. Series “E” includes both £5 and £10 denominations and “F” includes the two higher denominations of £20 and the most recent addition, the £50 note which was added at the end of last year. There are currently three portraits included on circulating British coinage and two types of reverse designs. The post-decimal designs introduced in 1968 are widely seen on five denominations and of course, the “puzzle” reverse designs introduced in 2008 includes portions of the Royal crest – placed in a special arrangement and you can see the crest in its entirety. Last year, the Royal Mint introduced nickel plated steel coins for the 5 and 10 pence values. They’re easy to find… they’re magnetic! Don’t forget to look out for 29 commemorative Olympic-related reverse designs on the 50 pence coins, issued since last year, they are becoming more common and it is estimated that collectors will put aside more than $10,000,000 worth of the coins in the next year.