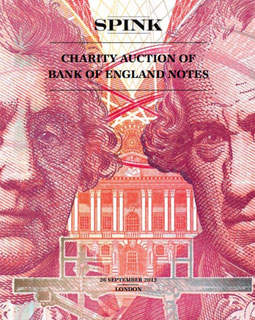 The Bank of England will offer for sale (26th September) 185 lots of current banknotes with low serial numbers from both the “E” and “F” series, both currently in circulation in the United Kingdom. With an introduction and endorsement from the Governor, Sir Mervyn King, the catalogue lists all of the lots scheduled to go under the hammer and is also sponsored by De La Rue, printers of BOE banknotes. The auction is to be conducted by Spink UK, and the proceeds of this auction are to benefit two well-known children’s charities in the United Kingdom chosen by the Bank of England specifically.

There is an intended focus on the “F” series £50 note which was the first denomination to include the signature of the Bank of England’s current Chief Cashier. Of particular interest for dedicated notaphilists is the inclusion of two uncut sheets of 36 £50 notes from the current “F” series. The banknote auction also includes the current £20, £10 and £5 banknotes which will include the signature of Chris Salmon, Bank of England Chief cashier – these notes are scheduled for release very shortly. The list of banknotes included in the auction contains cyphers (letter combinations) which will denote the first issue signatures of the Chief Cashier as well as very low serial numbers. The sale will also include low-serial numbers and cypher combinations from two previous Chief Cashiers, those of Andrew Bailey (2004 – 2011) and Merlyn Lowther (1999 – 2003). Several lots will combine three denominations (£20, £10 and £5) with matching serial numbers. The Bank of England have intentionally held back some of these previously issued notes for inclusion in sales such as this one. 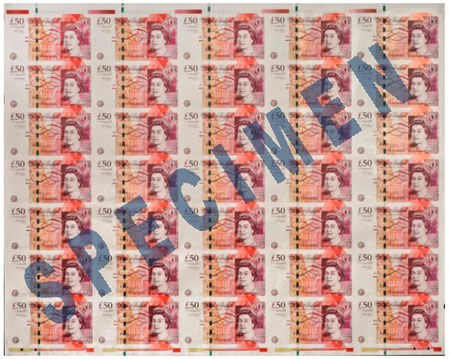 Interested collectors can bid on-line on the various lots by viewing or downloading the on-line catalogue at: http://www.spink.com/files/catalogue/12037.pdf

Demand for these notes is expected to be high as the serial numbers are especially low for some denominations and the two uncut sheets of £50 notes are also expected draw considerable interest. The sale will commence on the 26th September, 5:30 pm at their London location. Those local to their office at 69 Southampton Row, Bloomsbury London WC1B can view the lots from 5:00 pm until the start of the auction. Internet bids will be accepted – In sending commission bids or making enquiries, the sale should be referred to as SOHO – 12037. For more information, please visit the website of Spink UK at: http://www.spink.com/