The United States Mint has started accepting orders for bags and rolls of circulating quality Hawaii Volcanoes National Park Quarters. This coin represents the latest release in the America the Beautiful Quarters Program, which highlights a different national park or site in each state, territory, and the District of Columbia. 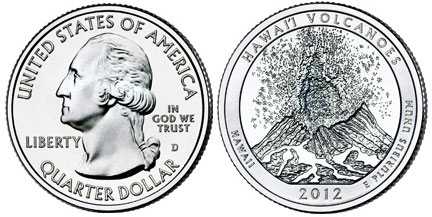 The reverse design of the Hawaii Volcanoes Quarter by Charles L. Vickers features an eruption on the east rift of the Kilauwa Volcano. The inscriptions include “Hawai’i Volcanoes”, “Hawaii”, “2012”, and E Pluribus Unum.

Featured on the obverse of the coin is the 1932 portrait of George Washington designed by John Flanagan, which has been used in common for each issue of the series. Inscriptions read “United States of America”, “Liberty”, “In God We Trust”, and “Quarter Dollar”.

From the US Mint’s recently introduced new product type containing circulating quality quarters with the “S” mint mark are 100-coin bags priced at $34.95 or 40-coin rolls priced at $18.95. Unlike the coins with the “P” and “D” mint mark, these coins are not released through the channels of circulation, but only available within numismatic products.

All of these products come within special numismatic packaging that includes the name of the site, state abbreviation, mint mark, and face value of the contents. Orders may be placed online at http://catalog.usmint.gov/