To celebrate the twentieth year of issue, the Austrian Mint has produce a limited number of Gold Philharmonic coins, each weighing 20 ounces. The coins have been available in Europe, America, and Japan from October 16, 2009. 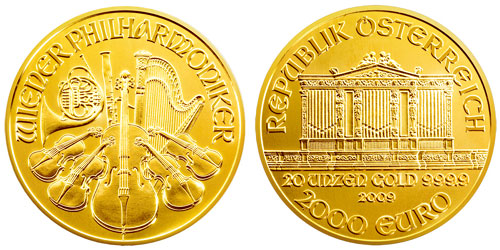 The Gold Philharmonic was introduced in 1989 . At the time the market was dominated by the bullion coins produced by the United States, Canada, and Australia. The Austrian Mint entered the market with one ounce and one-quarter ounce gold bullion coins with a design honoring the Vienna Philharmonic. Thomas Pesendorfer designed the coins with an image of the pipe organ of the Golden Hall and a collection of instructions to represent the orchestra itself.

The 20 ounce 2009 Gold Philharmonic coins will be a limited one time issue. Only 6,027 coins will be minted and offered in the coin’s major markets in Europe, America, and Japan. The coins will have a diameter of 74 mm and thickness of 8.3 mm. They will be housed in a wooden and red velvet case.