To celebrate the 2010 Olympic Winter Games held in Vancouver, the Austrian Mint has issued two silver 5 Euro Coins. Each coin depicts a winter sport in which Austria excels, namely ski jumping and snowboarding.

The 5 Euro Ski Jump coin displays a helmeted ski jumper in mid flight with a background of trees in an alpine forest,  designed by Helmut Andexlinger. The 5 Euro Snowboarding coin features a female snowboarder as she performs a trick, flipping her snowboard over the rim of the half-pipe, as designed by Chief Engraver Thomas Pesendorfer.

Both coins have a common official side, which features the shields of the nine federal provinces of the Republic of Austria with the face value “5” in the center. Each nine-sided coin is struck in 80% silver with a diameter of 28.5 mm and weight of 10 grams. 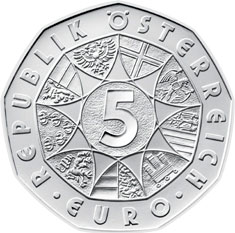 The coins were first released on January 20, 2010. There will be 450,000 circulation quality coins released at face value through banks. This will include 225,000 coins for each design.

An additional 50,000 sets, containing each of the two coins will be issued in special uncirculated quality for collectors. The coins are housed in an illustrated double blister pack with the sets priced at 18,00 EUR.