The Austrian Mint has released their latest silver and niobium bimetallic 25 euro coin. Representing the ninth annual issue, the coin features the theme of robotics and the niobium core is colored a deep reddish-pink. 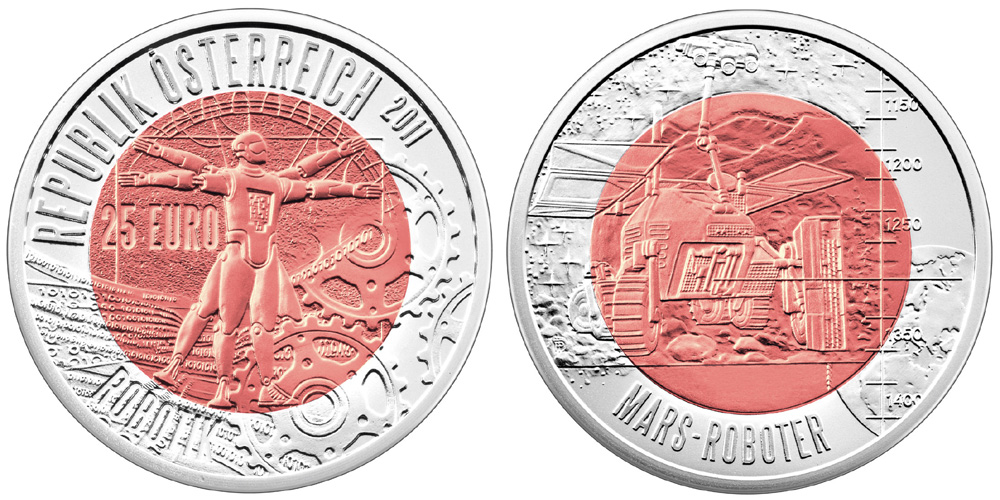 The obverse of the coin portrays a robot in humanoid form, recalling the Vetruvian man of Leonardo Da Vinci. The robot’s arms fit within the niobium core and at the feet are lines of zeros and ones running through the ring and the core. These represent the thousands of lines of binary code necessary to program a robot. To the right are three cogs, symbolizing the inner mechanics of the robot. The inscriptions include “Republik Oesterreich”, “Robotik”, the year of issue “2011”, and the face value “25 Euros”. The designer of the obverse is Helmut Andexlinger.

The Mars Lander is pictured on the reverse of the coin, designed by Thomas Pesendorfer. The lander appears on the surface of Mars, hence the coloration of the core. The background shows the mountainous surface of the Martian landscape, a ring of stars above, and the earth as viewed from space, positioned to the right. The inscription reads “Mars-Roboter”.

Each coin is has a diameter of 34 mm, and contains 9 grams of .900 fine silver in the outer ring and 7.15 grams of .998 pure niobium in the inner core. The 25-euro coins have a maximum mintage of 65,000 pieces, struck in special uncirculated quality.