On November 4, 2009, the Austrian Mint released the second coin in the series “Crowns of the House of Hasburg.” The new 100 Euro gold coin is dedicated to the Archducal Crown of Austria. The crown is also referred to as the “Archduke’s Hat”, a name derived from the red velvet cap within the crown itself.

The obverse of the coin depicts the crown resting on the cushion of the federal lower states of Austria. The elaborately embroidered cushion was used for the procession of the crown in the palace, through the streets of Vienna and into to the cathedral. The Archduke’s Hat is a diadem of eight golden peaks decorated with enamel, pearls and precious stones. Two pearl encrusted arches hold a sapphire mounted by a cross at their intersection. In the crown itself is a red velvet cap and the diadem is surrounded with a circle of ermine. The inscription “Republk Oesterreich” (Republic of Austria) appears on the above the crown. The face value “100 Euro” and the year of issue “2009” are located on the left side. Below are the words “Oesterreichischer Erzherzogshut” (Austrian Archduke’s Hat).

The reverse of the coin depicts the solemn ceremonial procession. Three high-ranking officials of the Lower Austrian Estates carry the crown, the orb and the scepter along the centrally located street called the Graben, from the palace to the cathedral. The officials are wearing court finery, including the tall wigs known as periwigs from about the early 1700’s. Soldiers wearing tricorner uniform hats line the streets while a serious drumbeat is sounded as accompaniment. In the upper right side of the reverse the intricate Baroque monument in memory the ravishes of the plaque can be seen. This memorial column was erected in 1692 and can still be viewed today in the same location along the Graben. In the left upper quadrant of the coin are the fine homes, usually with shops on the ground level, typical of this time, many of which remain today. 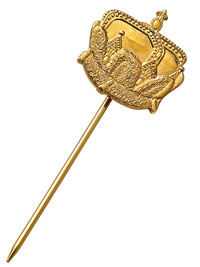 The new 100 Euro gold coin is designed by Mint engraver Helmut Andexlinger. It is struck in proof quality with a maximum mintage of 30,000 pieces. Each coin is encapsulated and comes in a box with a numbered certificate of authenticity. A unique lapel pin plated with gold and bearing a miniature version of the Archducal Crown also accompanies the gold coin.

The “Crowns of the House of Habsburgs” is a five coin series that started in 2008 with the Holy Roman Empire Crown gold proof coin. New coins are released in November of each year, with the final coin issued in 2012. All the coins will be struck to the same exacting standards of proof quality, from 16 grams of 98.6% gold on a 30.00mm flan, and featuring the intricately detailed designs of the Austrian Mint.