Coverage from Day One of the 2014 World Money Fair held in Berlin, Germany.

The Austrian Mint, guest host of this year’s World Money Fair, got things off to a very stylish start on Wednesday, 5th February with an exclusive reception for delegates and invited guests to the three-day numismatic event. Held at the Austrian Embassy in Berlin, the modern venue located at Stauffenberg strasse, the Mint welcomed their guests with a champagne reception while a quartet played classical Austrian music in the background. 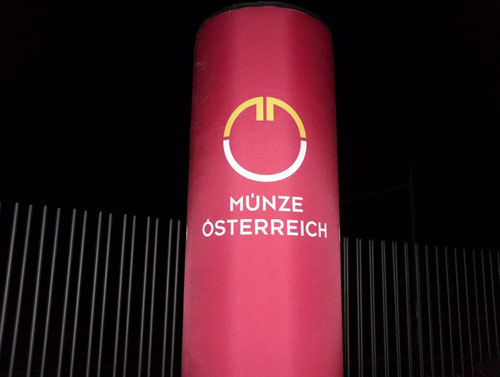 Illuminated lanterns placed outside the Austrian Embassy welcomed guests to the exclusive reception. 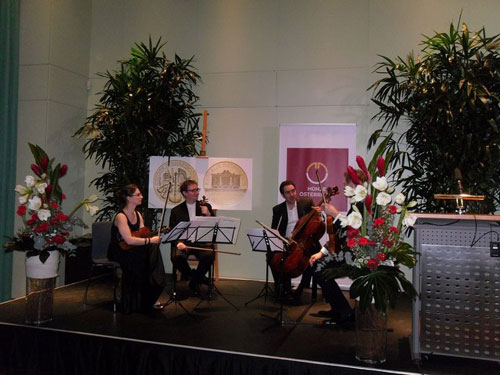 A quartet in the main reception hall plays classical Austrian music, the image of the Gold Philharmonic is in the background.

After a short speech by the Austrian ambassador to Germany, Dr. Ralph Scheide who commented how delighted the Embassy was to welcome the WMF delegates, Austrian Mint CEO Gerhard Starsich then paid tribute to both the 25th anniversary of the Austrian “Philarmonic” gold coin which was the feature of the evening’s festivities. Coincidentally, the Austrian Mint also marked 25 years as a limited company separate from the National Bank. 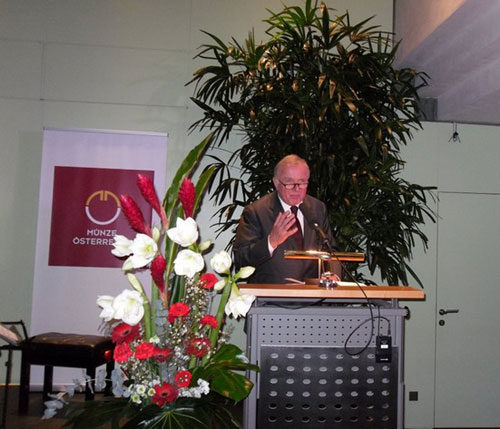 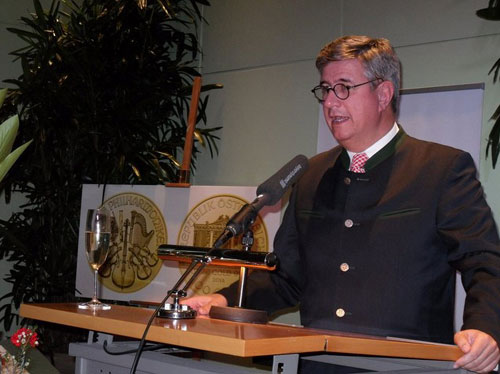 Austrian Mint CEO Gerhard Starsich as host of ceremonies, pays tribute to one of the world’s most popular gold coins, the Austrian “Philharmonic” as it celebrates 25 years.

Mr. Starsich then led guests into a more formally decorated hall where a very large birthday cake – complete with the Austrian Mint’s logo was brought out and lit with mini-roman candles. Ambassador Scheide dutifully cut the first slice of the cake which was served to guests and enjoyed along with a bountiful selection of red & white Austrian wines which was also introduced by Austria’s head delegate of the Austrian Wine association. 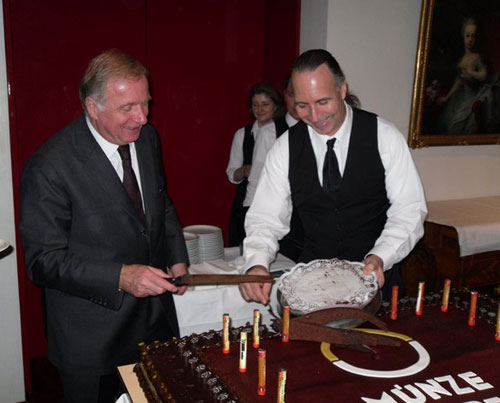 Ambassador Scheide cuts the first slice of the Austrian Mint’s 25th anniversary cake, the Mint celebrates 25 years as a separate company apart from the National Bank.

The three day World Money fair event with guest host – the Austrian Mint, officially opened on the 7th February and concluded on the 9th.