The Mint of Austria have launched their latest “New Year’s” coin, which has become very popular as a holiday gift for coin collectors and music lovers alike. This is the fourth year the Mint of Austria has produced a collector coin that specifically celebrates the New Year, but this coin is particularly special as it also highlights the famed New Year’s concert performed annually by the Vienna Philharmonic Orchestra and broadcast live to an international audience with an estimated 90 million listeners worldwide.

This year’s coin celebrates the 150th anniversary of the classical tune “An der schönen blauen Donau,” or “The Blue Danube,” which was composed by Johann Strauss II (1825–1899) in 1866 and was first performed the next year. Considered Austria’s unofficial national anthem, this tune was heard by the nation on April 29, 1945, on the occasion of the proclamation of Austria’s independence just before the official end of hostilities of the Second World War. Since no national anthem was available, “The Blue Danube” was played in front of Parliament.

Perhaps one of the most widely recognized pieces of classical music of all time, “The Blue Danube” is traditionally performed as the first tune during the annual concert, and it has become synonymous with the celebration of the New Year for many Austrians. The concert has been held since 1938 at the Wiener Musikverein (Viennese Music Association), a splendid venue designed in Neoclassical style and inaugurated in 1870. 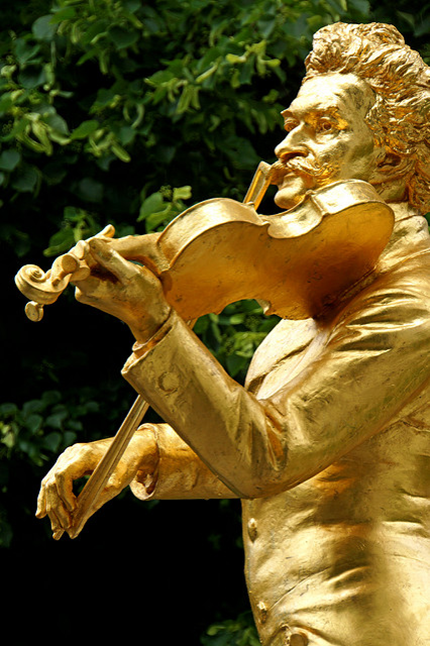 The obverse of the nine-sided coin features, in the foreground, a detail from the Johann Strauss II monument in Vienna’s Stadtpark, and in the background, a couple waltzing. At lower left is the year of issue, 2017, and at upper left, 150 Jahre Donauwalzer (“150 Years of the Blue Danube”).

The reverse depicts a multi-shielded standard design that includes the crests of all nine federal states within the Austrian Republic, along with the coin’s denomination and the words REPUBLIK ÖSTERREICH.

The coin is produced in both copper (Uncirculated) and silver (Brilliant Uncirculated), with the silver version being presented and packaged in a colorful blister-pack and folder. The coins will be released on December 7. For more information on these and other coins issued by the Mint of Austria, please visit their website, which provides information in both German and English. International orders dispatched where applicable.  ❑

The previous New Year’s coin from the Mint of Austria, along with the world-famous Vienna Philharmonic bullion coins, are available at APMEX.

Austria: Centenary of the Austrian Republic is the focus for 2018-dated €2 coin