The Austrian Mint have issued (22nd February) a new coin that inaugurates a four-coin series dedicated to “Heavenly Messengers.” Through the ages, believers have looked to angels for protection; the divine beings are worshiped by Christians, Jews, and Muslims alike. These benevolent but invisible spirits have been widely depicted throughout art history, and one of the more famous is the Archangel Michael. Known in many Christian denominations as “Saint Michael the Archangel” or simply as “Saint Michael,” he is mentioned in both the Hebrew scriptures (or Old Testament) and the New Testament’s Book of Revelation. Michael is also mentioned in the Quran as Mikhail, and attributed as being one of the three angels who visited Abraham. As the leader of the holy legion, Michael has a particularly devoted following. He became the patron saint of the Holy Roman Empire after the victorious battle of Lechfeld in 955. In late medieval Christianity, Michael, together with Saint George, became the patron saint of chivalry—the code of conduct associated with the medieval institution of knighthood. In the modern world, Michael is considered the patron saint of police officers, paramedics, firefighters, and the military, predominantly due to his folklore as a warrior. His primary Western liturgical feast day is celebrated on the 29th September and referred to by many as “Michaelmas.” In the Eastern liturgical calendar, it is on the 8th November when all archangels are honoured.

The coin is designed by the Mint of Austria’s chief engraver, Helmut Andexlinger. The reverse shows a detail adapted from the famous depiction of Saint Michael slaying the dragon, painted on the altar of the church of Sant Miquel de Soriguerola in Catalonia, Spain. The painting, which dates from the end of the 13th century, is credited to an anonymous artist known as Mestre de (Master of) Soriguerola, and can be found today in the Museu Nacional d’Art de Catalunya in Barcelona, Spain.

The coin’s obverse shows a sword with a waved blade crossed with a set of scales framed inside the stylised letter “M”—popular symbols of Michael—surrounded by a grapevine ornament. On the silver Proof version, the grapevine is enhanced with a rich blue color.

The coin is the first in a four-coin, interfaith series of €10 coins in silver and copper featuring historical representations of angels. The Proof coins are encapsulated in a presentation case with a numbered certificate of authenticity. The certificate includes all the technical details as well as background information about the series. The special Uncirculated coins are available in a blister pack with an illustration of Archangel Michael on the sleeve. For Austrian residents, the coin will be available in circulation quality and struck in copper. The copper coins have a milled or reeded edge, whereas the silver coins have a smooth edge. Specially crafted presentation cases for both the select BU and Proof coins are also available separately. No information is yet available as to the frequency of issue for the remaining three coins in the new series. 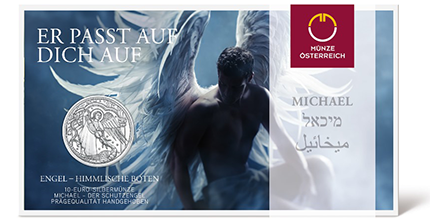 For more information on this and other coins on offer from the Austrian Mint, please visit their website.