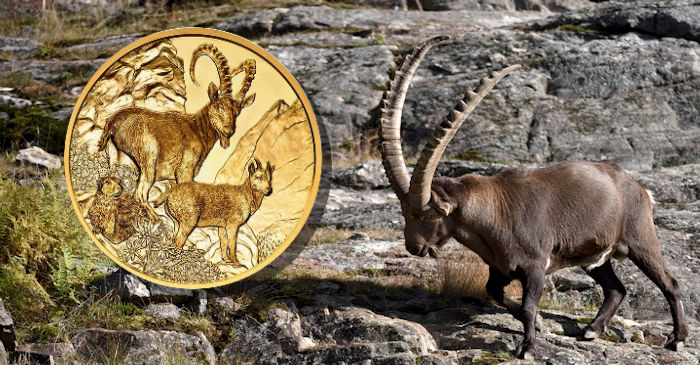 The Austrian Mint has launched (12th September) their latest gold coin which highlights some of the European continent’s more interesting and diverse wildlife and habitats. The series was initiated in 2013 and is entitled “Wildlife in Our Sights.” It features the animals who dwell in forests and make delicate, but robust, habitats their own special homes. This year’s coin features the Alpine ibex with intricate and detailed images on both sides of the coin. Almost hunted to extinction in the 19th century because its blood and horns were thought to possess mythical healing powers, today the population of the Alpine ibex is estimated to be around 45,000. After a gestation period of five to six months, the Alpine ibex’s young are born in May or June with immature males and females living together in a herd. However, young bucks break away to form a separate herd as they approach maturity. In the rutting season, adult bucks seek out females and try to win control over the herd by putting on a show of strength confronting rival bucks. On hind legs, they bring their horns crashing down against those of their opponents. In spring, the bucks become solitary again and spend increasingly more time alone as they get older. 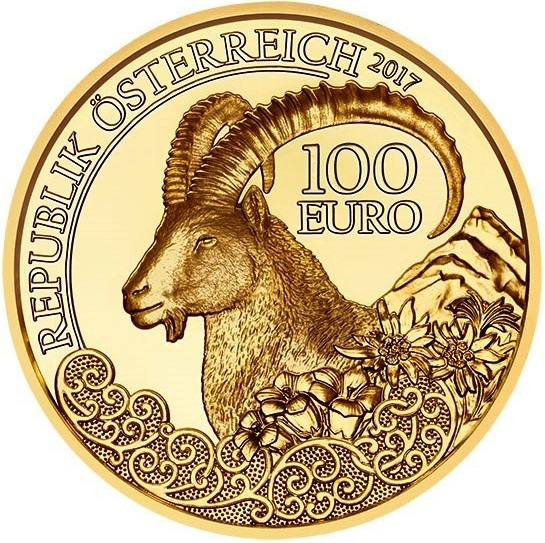 The design of the coin is a collaborative effort between Helmut Andexlinger, Kathrin Kuntner, and Herbert Wähner. The obverse shows an ibex in profile surrounded by Alpine primroses and edelweiss on the obverse side. Like the other coins in the series, the lower part is exquisitely decorated with a handsome design that gives the series its distinctive character. The text REPUBLIK ÖSTERREICH and the face value of 100 EURO are also incorporated into the design. 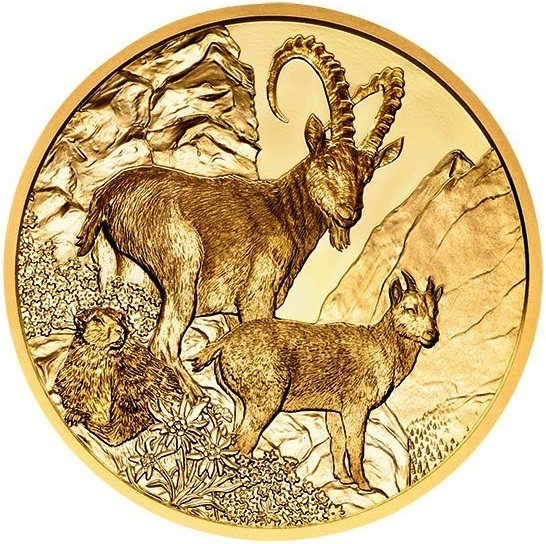 The coin’s reverse side shows an ibex with its young on a steep rock face, as a marmot looks on.

The coin is struck in a ducat standard of .986 fine gold to Proof quality. Each coin comes in an attractive box with a numbered certificate of authenticity. A specially designed custom wooden collector case is also available to house the entire six-coin series and provides a perfect format in which to admire your coins. Designed and crafted in-house by the Austrian Mint’s engravers, a minted shield graces the center of the lid. The coin will be officially issued on the 18th October 2017, and the Mint of Austria are accepting pre-issue orders for delivery after the 18th October. For additional information on this and other coins offered by the Mint of Austria, please visit their website.

Past coins in the series are available from Coin Update sponsor APMEX.