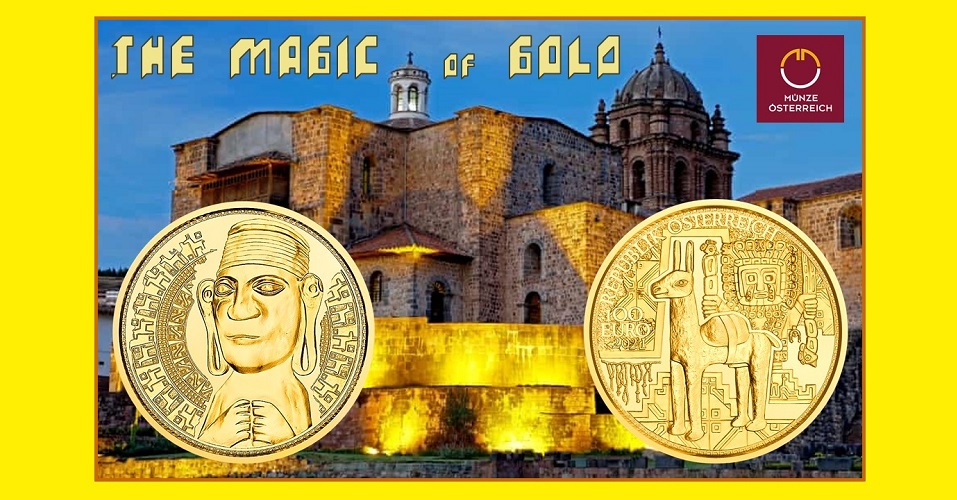 The Austrian Mint has released the third coin in their ongoing gold coin series entitled “The Magic of Gold” highlighting the artistry and history of creativity the world over utilising the most coveted and precious metal: Gold. The latest coins feature the beauty and uniqueness of the empire of the Incas, who, from the 13th to the 16th centuries ruled over a huge civilisation.

Created by Austrian Mint artisans Helmut Andexlinger and Herbert Wähner, the coin’s obverse features a stylised lama in the centre, which is modelled on gold offerings unearthed by archaeologists. Behind it stands an opening in a highly decorative wall, a reference to the Coricancha (Golden Temple). To the right is the mask and image of a deity with tears rolling down his cheeks. A quipu (knot record), the system used by the Incas to communicate information and keep records, is shown on the bottom-left. The coins’ denomination of 100 EURO and year of mintage 2021 is placed just above the quipu. The additional text REPUBLIK OSTTERRICH is placed along the upper-left edge above the primary design.

The coin’s reverse shows an oréjon, a golden votive offering of an Inca nobleman, against an ornamental background. The figure’s distended earlobes are the result of the earpieces typically worn by the Incas. In a circular pattern are stylised images of llamas placed on either side of the oréjon.

All six coins in “The Magic of Gold” series feature ancient art treasures and the word “gold” is written on each of them in the respective script of the culture they explore such as Mesopotamia, Ancient Egypt, the Incas, the Scythians, India, and China. Each Proof-quality gold coin is encapsulated and presented in a heavy-gauge card case complete with a numbered certificate of authenticity and protective slipcase.

A custom hardwood collector case to store all the coins in the magnificent “The Magic of Gold” series is available as a separate item. The ornately illustrated brass inlay on the lid provides a fitting reference to the six gold coins held within. For additional information on this series, please visit the website of the Austrian Mint.