The Austrian Mint have issued  a charming coin which highlights one of the best known operettas known in German “Die Fledermaus” which tells the story of a Bat attending a ball or formal dance! Written by the composer Johann Strauss in 1874, the operetta debuted the same year at the Theater an der Wien in Vienna and has been part of their regular repertoire ever since.

The story line of the operetta Die Fledermaus is light-hearted, complex, and at times even confusing with its many twists and turns. An official gets offended because of a drunken misunderstanding, and throws his weight around. Then others get involved to protect their loved ones, which all works very well under the guise of a masked ball. Someone is sent to jail, and still others pretend to be someone they are not. Confusion builds until finally someone declares the whole thing is an act of vengeance largely because of the love triangle in which Rosalinde is the key female.

The nine-sided silver coin, designed by veteran Austrian Mint artist Thomas Pesendorfer with Mint engraver Helmut Andexlinger designing the reverse or shield side. The obverse depicts the eponymous Bat fluttering above the sparkling bubbles of a seasonal glass of champagne held by Rosalinde who as one of the main characters, is holding the glass in her gloved right hand, dressed in her finest ball dress with an elaborately feathered collar, and a double string of pearls around her neck. Her ornate facemask is accented by more feathers, which float above her extensively coiffured hair. The year of issue “2015” as well as the name of the operetta, “Die Fledermaus” (the bat), are also seen on the coin. The reverse of the coin is the standard 5-euro design, with the denomination encircled by the shields of the nine federal provinces of Austria. In the center is the face value of 5 euros.

Johann Strauss gave the world so many memorable treasures of the music. Of course, the “Blue Danube Waltz” which annually is first tune played in Austria after the clock strikes midnight on December 31, welcoming in the New Year. Many regard the “Blue Danube Waltz” as Austria’s unofficial national anthem. The life of Johann Strauss has been featured in several films and even Walt Disney movies. Music from “Die Fledermaus” was used in a Tom and Jerry movie back in the 1950’s. In recent popular culture, “Friends” watchers may remember that “Die Fledermaus” was the operetta in which the character Rachael persuades Ross into taking her boss’s niece Emily to so she can meet her new flame Joshua – leading to comical complications with Ross eventually marrying Emily in London! 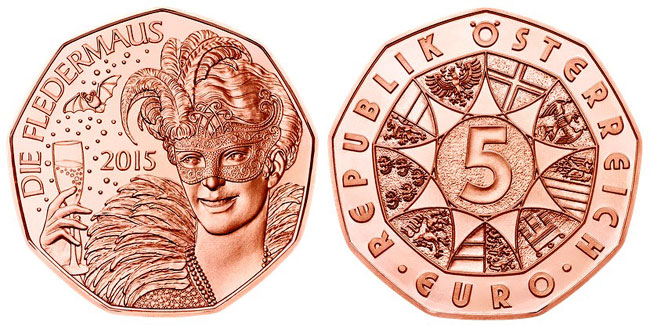 The silver coin is available in special uncirculated quality and is sealed in a colorful and informative blister pack/folder. The copper examples are available in Austria at face value from commercial banks and post offices. For more information on this and other coins offered by the Austrian Mint, please visit their website at: http://www.muenzeoesterreich.at/eng/produkte/die-fledermaus Information offered in German and English – international orders dispatched.