The Austrian Mint has announced that its first coin dated 2016 will be dedicated to one of the country’s most anticipated cultural events of the year: the Vienna Opera Ball. Considered one of the most elegant and quintessentially “Austrian” events in the social calendar, the Vienna Opera Ball celebrates its 60th anniversary in 2016, though its origins span much further back in the country’s history.

The Opera Ball has existed since 1814 when it was first hosted by the Imperial Court of the Habsburg dynasty. The outbreak of the Second World War and the subsequent adversity faced by war-torn Vienna forced a 17-year hiatus upon the event. The Opera Ball was re-established in 1956 in its original home, the newly re-opened Vienna State Opera, where it has remained ever since. The Opera Ball had been held there since 1877 when Emperor Franz Joseph I gave his consent to a ‘soiree’ in the opera house. Dancing was not officially allowed that night but one thing led to another and after midnight the first dance took place. The rest, as they say, is history… 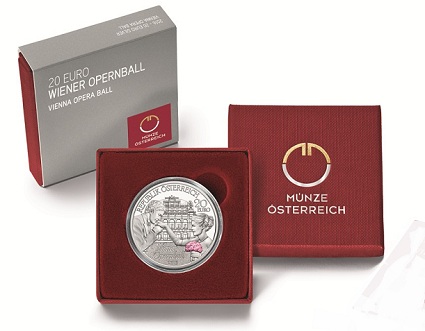 The Ball was, and remains, the classic place for the young debutantes of Vienna to make their first official appearance in society.  To this day, young ladies and gentlemen go to special dance schools for weeks in advance of the Opera Ball to learn the Viennese Waltz, a classic, slower style of the original waltz done in a closed embrace to ensure that their first appearance in the modern day era steps off on the correct foot. 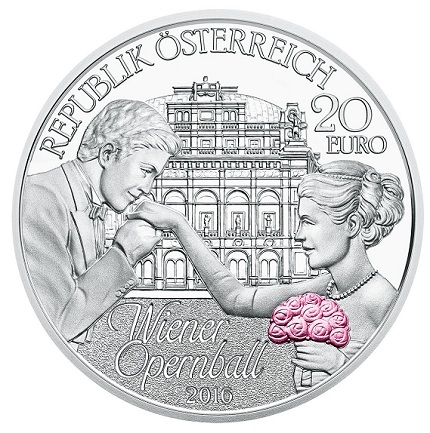 The obverse design of the coin depicts a young couple in the foreground: the young lady holds a bouquet of flowers highlighted in pink, while a young gentleman kisses her hand.  The name of the country REPUBLIC ÖSTERREICH (Republic of Austria), the year of issue, and the face value are also depicted on this side of the coin. The text WEINER OPERNBALL (Vienna Opera Ball) is located just below the main motif. 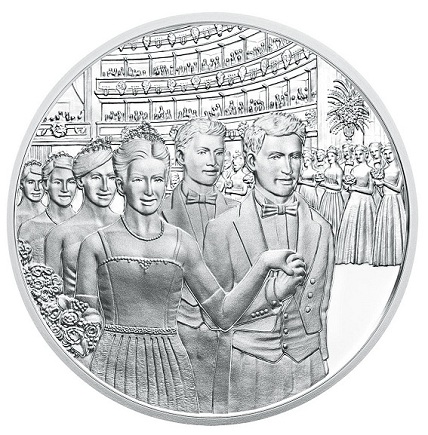 The reverse side depicts a highlight of the Opera Ball — the dance of the young ladies and young men’s committee, which sees the couples coming to the dance floor in straight lines to perform the first waltz and officially open the ball. Around the outer edge of the dance floor, other participants applaud the young couples coming onto the floor. In the boxes of the opera house many more participants are noted observing the official opening.

The issue date for this new coin will be the January 20, 2016 and it is available directly from the Austrian Mint. Each coin is encapsulated and comes in box with a sleeve, with an individually numbered certificate of authenticity.

For more information on this and other coins offered by the Austrian Mint, please visit their Web site. Information is offered in English and German, with international orders dispatched where applicable.