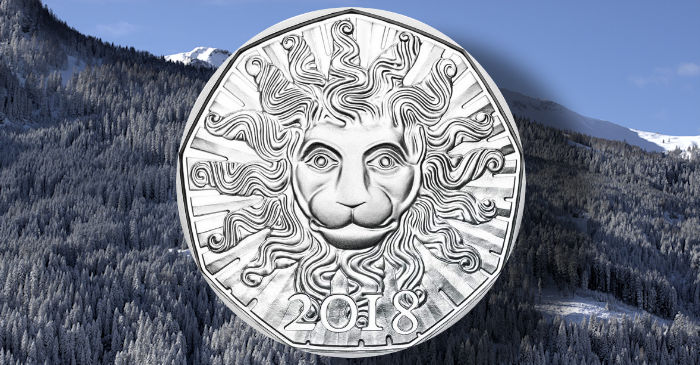 The Mint of Austria have unveiled the design of their new €5 2018-dated coin which is released in time for the holidays and has become a firm favourite for gift-giving. This year’s festive €5 coin is themed “A Lion in Winter” and takes its inspiration from a motif spanning back some 650 years, where the lustrous head of a lion — its mischievous grin framed by a handsome flowing mane — was traditionally chosen to represent the season of winter. This charming, almost feminine representation of a lion was found on the cover of the oldest book among the millions that make up the impressive collection of the Austrian National Library. Authored by Catholic priest Johannes von Troppau in 1368, the Holy Gospels are transcribed in gold in this wonderful tome alongside detailed illustrations.

The nine-sided, 2018-dated coin is designed by Helmut Andexlinger, Anna Rastl, and Herbert Wähner, and includes a stylised, front-facing image of a lion with its curly mane flowing in every direction. The year of issue, 2018, is placed just below the primary motif. The reverse side includes the coats of arms of the nine federal provinces of Austria.

The New Year coin, which features a different Austrian New Year theme each year, is available in Uncirculated quality and is presented in a colourful blister-pak folder suitable as the perfect gift both for coin collectors or friends and family alike. In addition to the silver version €5 coins, the Lion in Winter holiday coins will be issued in pure copper in Brilliant Uncirculated quality at commercial banks and post offices. For additional information on these and other coins released by the Mint of Austria, please visit their website.