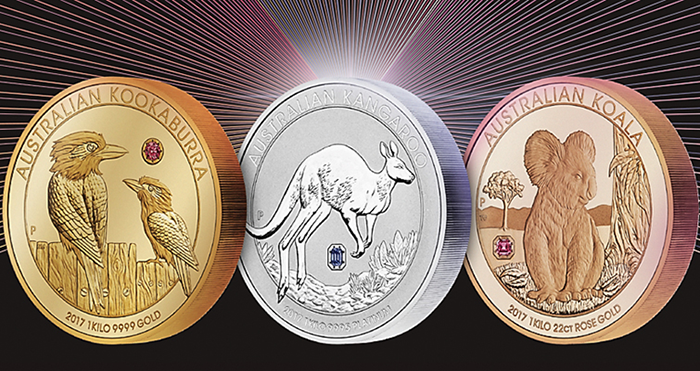 On June 7, the premier of Western Australia, the Honorable Mark McGowan MLA, unveiled a $1.8 million, one-of-a-kind coin collection struck by the Perth Mint.

The Australian Trilogy celebrates a selection of the nation’s natural treasures and is the Mint’s most significant numismatic release for 2017. In a convergence of color and light, the collection showcases three of Australia’s most beloved fauna on three precious-metal kilo coins. Each coin is hand set with a natural, fancy-colored diamond from Rio Tinto’s Argyle Diamond Mine.

Officiating at the event, the premier said that the creation of such an exceptional collector’s item reinforces Australia’s position on the world stage as a country of rare riches and unique wildlife.

“The Perth Mint and Rio Tinto Argyle Diamonds are global leaders in their respective industries and purveyors of superb craftsmanship. I am proud to unveil a creation which captures the treasures of our State,” said Premier McGowan. 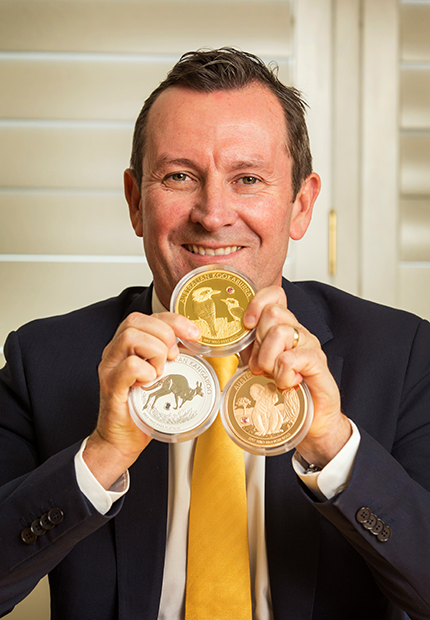 Premier McGowan holds up the trilogy of kilo coins. (Photo courtesy of the Perth Mint)

To complete the trilogy, the 91.67% rose-gold Australian Koala coin illustrates the native marsupial beneath a eucalyptus tree in a rural landscape beside a 0.58-carat, emerald-cut, intense pink diamond.

Each coin is bordered by a title inscription; the 2017 year-date; the weight, fineness, and metal; and the Perth Mint’s traditional “P” mintmark.

Confirming its status as official legal tender of Australia, each release also displays the renowned Ian Rank-Broadley effigy of Her Majesty Queen Elizabeth II on its obverse.

The Perth Mint’s association with Argyle Pink Diamonds began in 2008, when it became a Select Atelier for the Western Australian–based diamond consortium. In 2012 this retail relationship developed into a collaborative partnership with the creation of an annual range of luxurious collectables.

Since then, these diamond-edition ingots and coins have received worldwide acclaim. While many issues sold out within weeks of their release, the iconic 2016 Kimberley Treasure coin, valued at $1 million, sold to an international buyer within just 48 hours.

Gold and silver bullion and numismatic products from the Perth Mint can also be found on the website of Coin Update sponsor APMEX.

“The Australian Trilogy has elevated our creations to a new level with three diamond-studded gold and platinum coins in one dazzling presentation,” said Perth Mint chief executive officer Richard Hayes.

“Collectables of this class are often reserved for private viewing only, but we will display the Australian Trilogy in our retail shop on Hay Street for the remainder of June to give the people of Western Australia and the many visitors to our State the opportunity to view this prized treasure,” Mr. Hayes continued.

The Australian Trilogy is also now available for sale. Interested parties are able to acquire further details by calling +61 8 9421 7376.

Only one of the Australian Trilogy 2017 1-Kilogram Collection will ever be released by the Perth Mint, which has released the following behind-the-scenes footage of how the rare diamonds were set on YouTube:

The Perth Mint’s entire range of precious-metals products can be viewed at perthmint.com.au. More information about Argyle Pink Diamonds can be found on the company’s website.   ❑