The Perth Mint has released the latest coin within their innovative Australian Opal series, which features nocturnal animals created in pure opal.  The series began earlier this year with the first coin featuring the Koala and will include a total of eight coins, released at a rate of two coins per year. 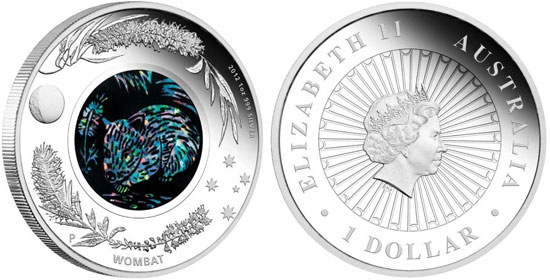 The 2012 Wombat Opal Series Silver Coin includes an inner panel design of a wombat detailed in pure Australian opal. The outer panel includes Bottlebrush leaves and blossoms, a waxing crescent moon, and the Southern Cross, a star constellation which is visible in the southern hemisphere. Inscriptions on the reverse include “2012 1 oz 999 Silver”, “Wombat”, and the Perth Mint’s “P” mint mark.

The obverse of the coin features the Ian Rank-Broadley effigy of Queen Elizabeth II within a circular design arrangement. Inscriptions around the outer edge include “Elizabeth II”, “Australia”, and the legal tender denomination “1 Dollar”. 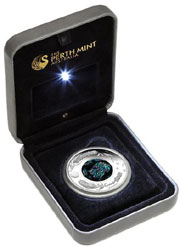 The Wombat coins are housed in a special display case with a functioning light, which turns on when the case is opened. This is intended to represent the moon shining down on the nocturnal animal. The packaging is completed with an illustrated shipper and numbered certificate of authenticity.