The Perth Mint has released the third coin within the Australian Map Shaped Coin Series featuring the kangaroo. The previous releases of the series, which featured the kookaburra and the emu, have both sold out. 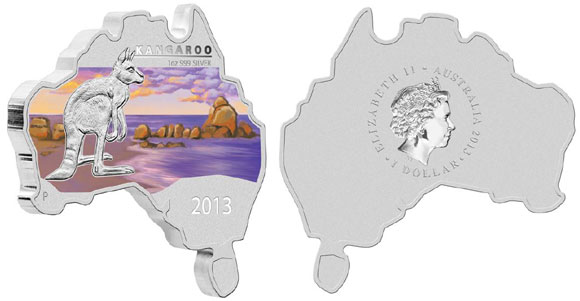 The kangaroo is one of the most symbolic animals of Australia. The animal is well adapted to hop great distances and the females have a pouch to carry their young. The reverse design of the map-shaped coin features a depiction of a kangaroo against a colored sunset scene at Picnic Rocks, Tasmania. The inscriptions include “Kangaroo”, “1 oz 999 Silver”, and “2013”. The Perth Mint’s “P” mint mark also appears.

On the obverse of the coin is the Ian Rank-Broadley effigy of Queen Elizabeth II with surrounding inscriptions “Elizabeth II”, “Australia”, “1 Dollar”, and “2013”.

Each coin is struck in 1 troy ounce of 99.9% fine silver with a maximum width of 40.60 mm and thickness of 4.50 mm. Each coin comes housed in a display case with an illustrated shipper and numbered certificate of authenticity.

The Perth Mint will release no more than 6,000 of these coins worldwide. There is an initial ordering limit of one coin per household. For additional information or to place an order, please visit the Perth Mint product page.