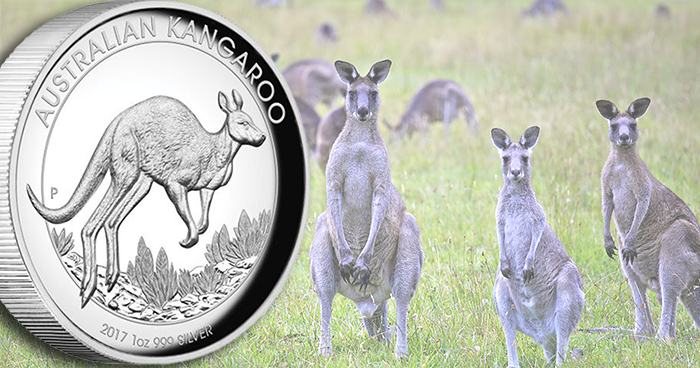 The Perth Mint has released the 2017 silver 1-ounce Kangaroo high-relief Proof coin, and has added a couple of new items to the popular Kangaroo lineup. On the affordable end of the spectrum, the mint is now issuing rectangular 1-ounce silver Kangaroo bars—while on the extravagant end, it’s offering a 2-ounce gold Proof coin with an Argyle pink diamond embedded in the reverse. 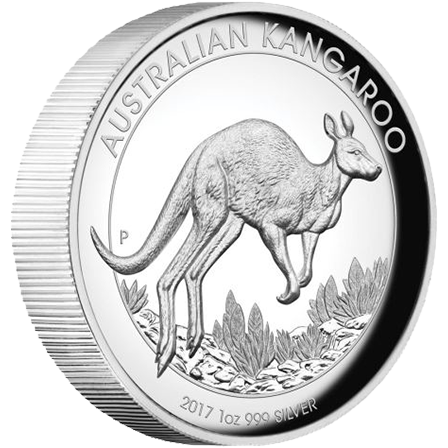 The design for the 1-ounce silver Proof Kangaroo changes annually. The 2017 edition, designed by Jennifer McKenna, depicts a kangaroo bounding across an outback plain from left to right, surrounded by—and partially extending onto—a plain border. (It has essentially the same main motif as the platinum Proof in the “Australian Trilogy,” discussed below.) Above the field, on the border, are the words AUSTRALIAN KANGAROO; below, in smaller letters, are the date, weight, fineness, and metal, as 2017 1oz 999 SILVER. To the left on the border is a small P mintmark. 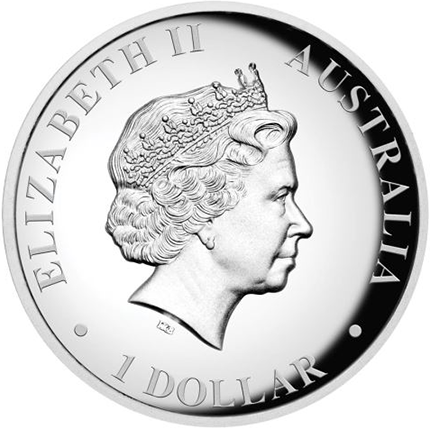 The obverse depicts the Ian Rank-Broadley effigy of HM Queen Elizabeth II on a plain field, surrounded by the legends ELIZABETH II at upper left, AUSTRALIA at upper right, and 1 DOLLAR below. The edge is reeded, and the high-relief obverse and reverse are struck on concave surfaces to achieve optimal metal flow.

For more information on the 2017 silver 1-ounce Proof Kangaroo and other available coins, please see the website of the Perth Mint. 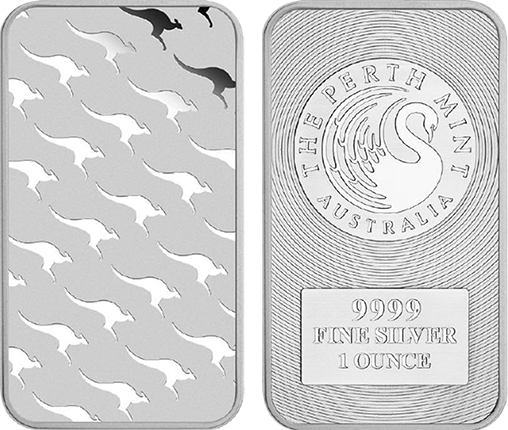 New to the Perth Mint’s annual Kangaroo-branded bullion line is the 1-ounce silver bar. Struck in .9999 fine silver, the handsome wafers join the mint’s series of gold 1-ounce and fractional bullion bars. The obverse bears the distinctive, repeating kangaroo pattern, struck with a mirrored finish against a frosted background. The reverse bears the Perth Mint’s trademark swan emblem on a background of concentric circles. The fineness, metal, and weight are placed in three lines on a rectangular cartouche as 9999 / FINE SILVER / 1 OUNCE. A tiny P mintmark is incorporated within the last 9. The bars are undated.

Each silver minted bar, when purchased singly, is presented inside a lighthouse plastic pouch. The bars can also be purchased from the mint in multiples of 15; these are presented without capsules, housed in protective acrylic tubes.

For more information on 1-ounce silver Kangaroo bars and other bullion products, or to place an order, please visit the Perth Mint’s bullion website, perthmintbullion.com.

At the extreme opposite end of the Kangaroo spectrum is the 2-ounce, 2017 gold Proof “Pink Diamond Edition” coin. The coins were released within a day of the Perth Mint’s unveiling of the $1.8 million “Australian Trilogy”—three 1-kilo coins with the famous Kookaburra, Kangaroo, and Koala motifs, in yellow gold, platinum, and rose gold, respectively. Each kilo coin is set with a natural, fancy-colored diamond from Rio Tinto’s Argyle Diamond Mine. (The Perth Mint’s association with Argyle Pink Diamonds began in 2008, when it became a Select Atelier for the Western Australian–based diamond consortium. In 2012 this retail relationship developed into a collaborative partnership with the creation of an annual range of luxurious collectables.) 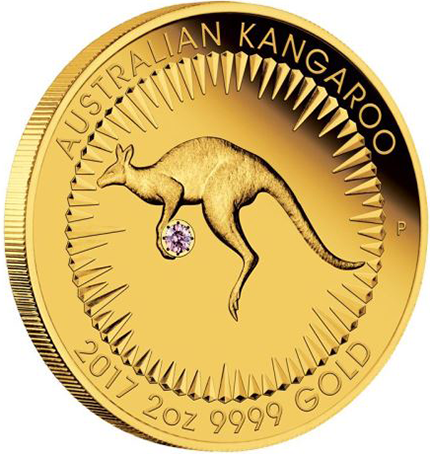 The reverse of the 2-ounce gold Proof uses essentially the same Kangaroo motif as the standard Kangaroo bullion coins: a red kangaroo bounding toward the left, surrounded by fine rays, except that in this case the rays are shortened, like irregular dentils. (The red-kangaroo design was introduced as part of the Australian Nugget gold-coin program as the new theme for the 1989 Proof issue. It was designed by Dr. Stuart Devlin, goldsmith and jeweler to HM Queen Elizabeth II.) On the plain border above the central design are the words AUSTRALIAN KANGAROO, while below are the date, weight, fineness, and metal, as 2017 2 OZ 9999 GOLD. To the right on the border is a small P mintmark. Set into the coin is a 0.037-carat Argyle pink diamond, placed as if held in the kangaroo’s paws. A pink diamond was chosen to complement the red-kangaroo species depicted on the coin. 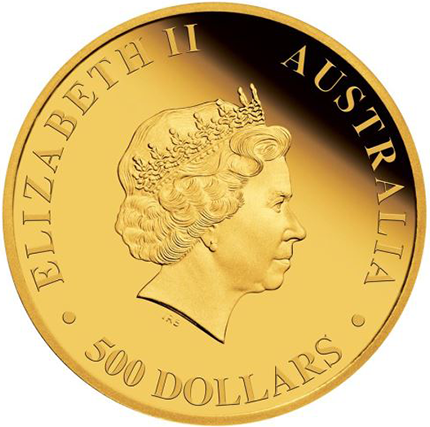 The obverse depicts the Ian Rank-Broadley effigy of HM Queen Elizabeth II on a plain field, surrounded by the legends ELIZABETH II at upper left, AUSTRALIA at upper right, and 500 DOLLARS below. The edge is reeded.

Each coin is housed in a black wooden display box with a numbered certificate of authenticity, and enclosed in a stylish black shipper. For more information on the coin, please visit its page on the website of the Perth Mint.   ❑