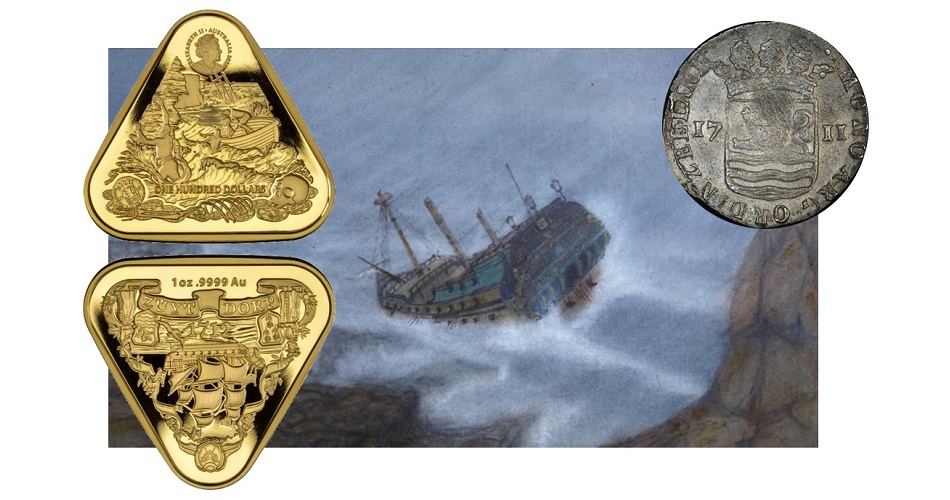 The Royal Australian Mint has released the third coin which is part of the popular and unique “Australian Shipwrecks” series that focuses on some of the continent’s most intriguing tales of mysterious and tragic shipwrecks recorded. The bullion-related series also features coins that are triangular-shaped in design and are a first-time feature for a bullion coin series. The third release features the Zuytdorp.

The tale and fate of the Zuytdorp, meaning “South Village,” began in 1711 when this Dutch East India Company — VOC trading ship set out from the Netherlands for Batavia in the Dutch East Indies on what was to be its third and final voyage. On board were more than 200 crewmen as well as a very precious cargo of 250,000 newly minted silver guilder coins. Their decision was made as previously expensive, but fruitless attempts were made to search for other missing ships, even when an approximate wreck location was known.

In 1964, a salvage mission was finally conducted to organise the first dive on the wreck, and a subsequent dive later found a veritable “carpet of silver” strewn along the ocean floor. These coins were inscribed with “Zeeland” and their year of minting, “1711,” which helped identify the wreck as the ill-fated Zuytdorp. Despite the many organised dives and research into the conditions which might have been prevalent at the time, why and how the Zuytdorp was wrecked still abounds in mystery today. However, what is firmly believed was there were indeed survivors from the Zuytdorp.

The exquisite design of the reverse is the work of graphic artist Arron Baggio, who conveys two scenes to communicate the journey of the Zuytdorp. With the image of the ship viewed upright, the Zuytdorp is shown setting sail in its full glory. Flip the coin top to bottom to view the text 1712 and Zuytdorp, which also depicts the ship in its final state, capsized shortly after wrecking in 1712.

The obverse design depicts scenes from the dramatic story of the Zuytdorp, which essentially tells the story to its fateful conclusion. Above the depiction of some of the crewmen swimming ashore on a lifeboat is a miniature Commonwealth effigy of HM Queen Elizabeth II surrounded by her legend. To the left corner and below the crewmen coming ashore are images of the silver ducats carried aboard the Zuytdorp and shown to the lower right corner, a skull and skeleton symbolising the loss of life aboard.

Each gold and silver coin is individually enclosed in an acrylic capsule to fit its unusual shape and is available as a single purchase or in sealed rolls of 10 pieces and boxed up to 240 pieces. For additional information about these coins and other coins in this series, please visit the website of LPM Ltd.