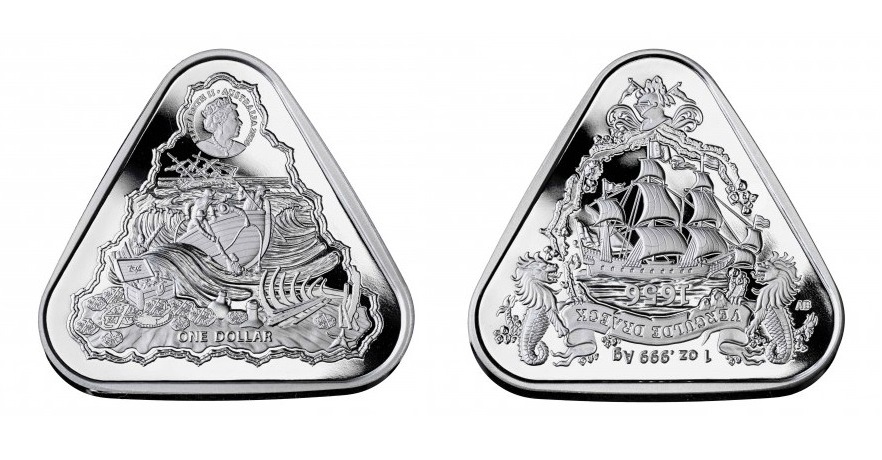 On the morning of the 28th April 1656, a VOC (Dutch East India Company) ship called the Vergulde Draeck (“Gilded Dragon”), a 41.8-metre, 260-tonne ship travelling from the Cape of Good Hope, South Africa,  towards Batavia (present-day Jakarta) with a load of trade goods, coins, cargo, passengers, and crew. The ship struck an uncharted reef off the coast of Western Australia which resulted in the reef gutting the ship with only 75 of the crew surviving, along with a small number of provisions and a single boat.

The under-steersman, Abraham Leeman, took the boat along with six crew members on an astonishing and gruelling journey to Batavia and reported the wreck. The wreck of the Vergulde Draeck was not discovered until 1963 and was excavated in 1972.

The Vergulde Draeck Gilded Dragon follows on from the popular first release in the series featuring the Batavia. The exquisite and clever design of the reverse conveys two scenes to communicate the journey of the Vergulde Draeck. With the image of the ship viewed upright, the Vergulde Draeck is shown setting sail in its full glory. Flipping the coin enables a view of the text of 1656 and VERGULDE DRAECK. Upright depicts the ship in its final state capsised shortly after wrecking in 1656. The obverse design depicts scenes from the dramatic story of the Vergulde Draeck before its ultimate demise. The border encompassing the main design also incorporates unique design elements from the Vergulde Draeck. The obverse side features the Commonwealth effigy of HM Queen Elizabeth II, along with the denomination of the triangular-shaped coin placed below the Queen’s likeness.

In collaboration with the Royal Australian Mint, the coins are exclusively distributed by LPM, who are pleased to present the second release in the Australian Shipwreck series featuring the Vergulde Draeck. The coins are produced in both gold and silver and weigh one troy ounce. For additional information about these coins and others offered by LPM, please visit their website.