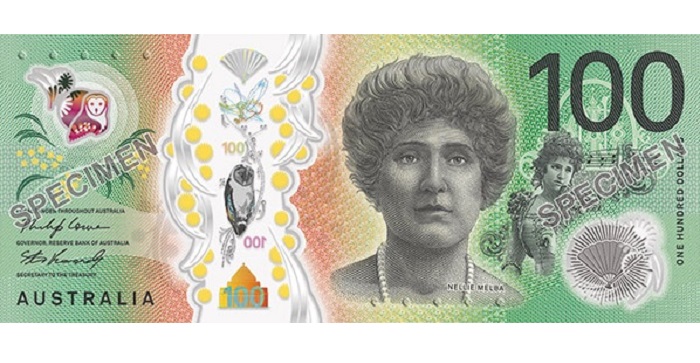 The Reserve Bank revealed (24th February) the design of the new $100 banknote, which is the final denomination to be redesigned as part of the Next Generation Banknote Program. As with the existing banknote introduced into circulation in 1996, the new $100 features revised images of Sir John Monash on its back side and Dame Nellie Melba, who is portrayed on the face side. The new design was introduced by the Reserve Bank of Australia’s Governor Philip Lowe at a special presentation. Commenting on the new design, he said, “They are innovative and contain world-leading security features that keep the banknotes secure,” further adding, “The new $100 banknote celebrates the contributions that two outstanding Australians, Sir John Monash and Dame Nellie Melba, made to our society.”

Face: Dame Nellie Melba, born Helen Porter Mitchell, was an internationally renowned soprano who performed in Australia, Europe, and the United States of America in the late 19th and early 20th century. The banknote includes an image of Melba in costume as Rosina in Rossini’s Barber of Seville, and the monogram from the cover of her homecoming concert tour program of 1902. In addition to performing, Melba made important contributions to the arts through teaching at the Melba Memorial Conservatorium of Music, now the Melba Opera Trust, in her home town of Melbourne. She also published the Melba Method (1926), an educational resource for singers.

Back: Sir John Monash was an engineer, soldier, and civic leader. He was a significant figure in the building-construction industry. Monash is also widely recognised for his service as a commander in the First World War. He led the Australian Imperial Force (AIF) during its successful campaigns in 1918 and subsequently managed the repatriation of Australian soldiers and presided over the AIF Education Scheme, which assisted with their transition to civilian life. Monash was instrumental in building the Shrine of Remembrance, which features on the banknote, in his hometown of Melbourne. He also served as the vice-chancellor of Melbourne University from 1923 to 1931.

As with the previously released denominations, the new banknote includes representations of Australian flora and fauna. The $100 features the Australian masked owl (Tyto novaehollandiae) and Australia’s national floral emblem, the golden wattle (Acacia pycnantha), which is native to Southeastern Australia and southern inland areas of New South Wales. The wattle frames the edges of the vertically placed window on the banknote, which features a number of dynamic security elements such as the flying owl, and a reversing number 100. All of the banknotes in the Next Generation Banknote Program have a tactile feature comprising of a series of impressed dots to help people who are visually impaired to distinguish between different denominations. There are five raised dots on each of the long edges of the new $100 banknote. The banknote will also retain the current green colour scheme identifying it with its denomination and the dimensions of 65 millimetres by 158 millimetres. The banknotes are scheduled for general release in the second half of 2020. Existing $100 banknotes remain legal tender and can continue to be used until further notice by the Reserve Bank of Australia.

For additional information about this banknote and others issued by the Reserve Bank of Australia, please visit their website.