The Royal Australian Mint have launched a new one dollar coin which marks a very special anniversary for the ANZAC alliance which was formed as a result of Australian and New Zealand involvement in the Great war as the United Kingdom entered the war.

The Australian and New Zealand Army Corps was ostensibly established in November 1914 while the first contingent of their army troops were still in convoy bound for, as they thought, Europe. However, following the experiences of the Canadian Expeditionary Force encamped on Salisbury Plain, it was decided not to subject the Australians and New Zealanders to the English winter and as a result, they were diverted to Egypt for training before moving on to the Western Front in France. The ANZAC’s operated during the Battle of Gallipoli (the peninsula which forms the northern bank of the Dardanelles) with General William Birdwood commanding the corps and comprised troops from the First Australian Imperial Force and 1st New Zealand Expeditionary Force. The corps was disbanded in 1916 following the Allied evacuation of the Gallipoli peninsula and the formation of I Anzac Corps and II Anzac Corps.

The campaign is often considered as the birth of national consciousness in Australia and New Zealand and the date of the landing, 25th April, is known as “ANZAC Day”. It remains the most significant commemoration of military casualties and veterans, surpassing Remembrance Day or Armistice Day. The fateful battle was re-told in a feature length movie Gallipoli made in 1981 which dramatically told of the intense battle and the loss of the many ANZAC soldiers. 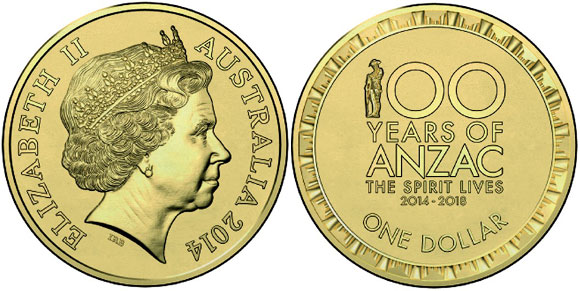 The golden coin’s design features the Anzac Centenary logo including the image of an Australian Digger, head bowed and rifle reversed in solemn reflection and the words ‘100 Years of Anzac – The Spirit Lives.  The coin is rimmed with a motif reflecting the sun’s rays as captured on the Australian Army’s Rising Sun badge. The obverse includes the current circulation coin portrait of HM Queen Elizabeth II as designed by Ian Rank-Broadley and in use on Australian coins since 1999.

For more information on this and other coins on offer from the Royal Australian Mint, please visit their website at: http://www.ramint.gov.au/media/press-releases/2014/20140213.cfm Information offered in English – international orders dispatched.