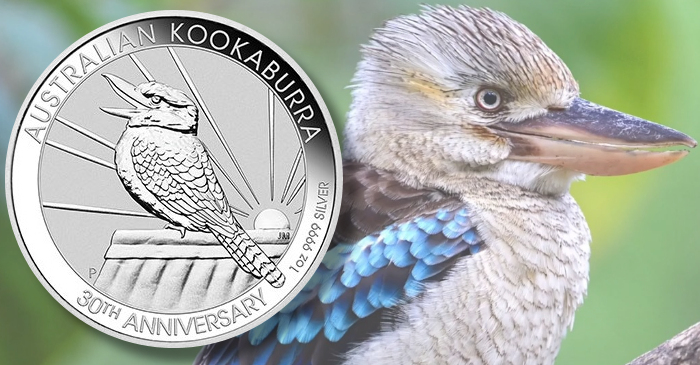 The Perth Mint has released new silver bullion-quality coins which include a commemorative design in celebration of the 30th anniversary of the “kookaburra” coins that debuted in 1990. First released with a five-dollar face value on the one-ounce size, the denomination was changed in 1992 and reduced to one dollar. The coins included a reverse design featuring the distinct kookaburra bird, native to Australia and New Guinea. These birds belong to the species Dacelo novaeguineae and are a part of the kingfisher family. They are prevalent in eastern Australia, whose Aboriginal name refers to their unusual call which sounds like fiendish laughter. Kookaburras defend their territory year-round and are monogamous.

Since the coin’s introduction, the reverse design has changed each year, featuring a new version or depiction of the bird, shown singularly or with their young, in-flight or perched. The maximum mintage of the one troy ounce coin is capped, while the other options of two-ounce, 10-ounce, or one-kilo sizes having an unlimited mintage which is based on demand. In addition to the annual design change, there is also a design change between the bullion and Proof versions of the coin each year. However, no Proof coins were minted between 2006 and 2011, and since 2012, the Proof coin has been struck in high relief only. As a special release in 2012, one-ounce silver Proof Kookaburras were minted with a colour design that was included as part of the Discover Australia coin series. The last commemorative Kookaburras were released in 2015 in recognition of the 25th anniversary of the series. These coins featured the original 1990 design, and, to differentiate the 1990 and 2015 coins, the date on the reverse was shown as “1990 – 2015” and the year of issue was added to the obverse. 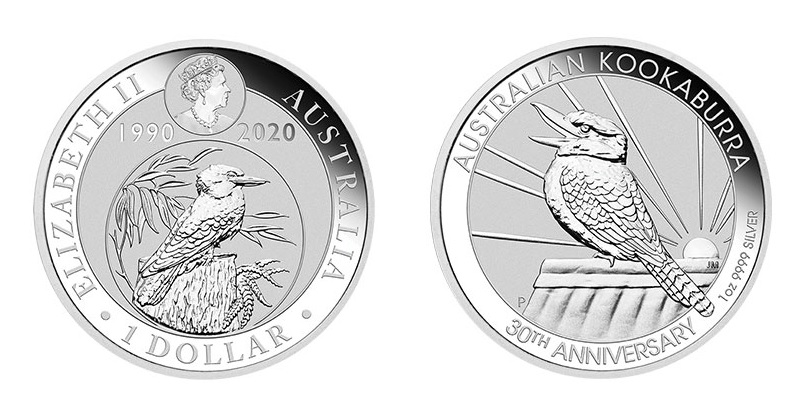 The reverse design on 2020-dated coins, which is included on all variations and sizes, portrays original artistry of a kookaburra perched on a corrugated rooftop at dawn with stylised rays of light in the background. Also included is the inscription AUSTRALIAN KOOKABURRA 30TH ANNIVERSARY, The Perth Mint’s “P” mintmark, and the weight and purity. Each of the bullion Kookaburra coins includes a helpful security feature in the form of a micro-laser engraved letter within the reverse design. 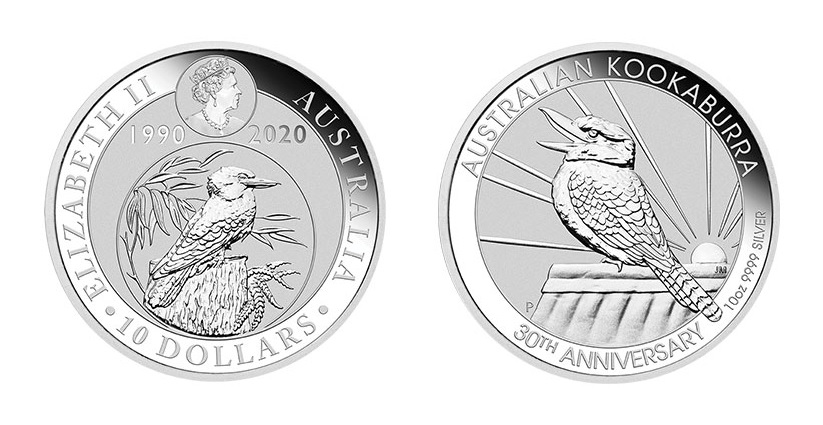 The obverse of each coin features a representation of Stuart Devlin’s first depiction of a kookaburra on a tree stump surrounded by native foliage, as it appeared on the 1990 Australian Kookaburra silver bullion coin. The anniversary dates 1990 – 2020 are also included together with a miniature representation of Jody Clark’s effigy of HM Queen Elizabeth II, which was adopted for all Australian circulation coinage this year. 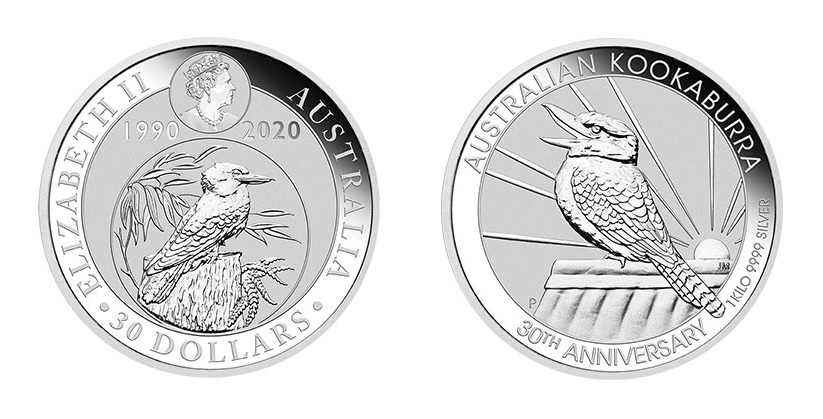 The Kookaburras are available in one kilogram, 10-ounce, and one-ounce sizes. The larger sizes have an unlimited mintage while the one-ounce size has a maximum of 500,000 coins. Each bullion coin is presented in a protective acrylic capsule. For additional information about these coins, including distribution points internationally, please visit the website of the Perth Mint.