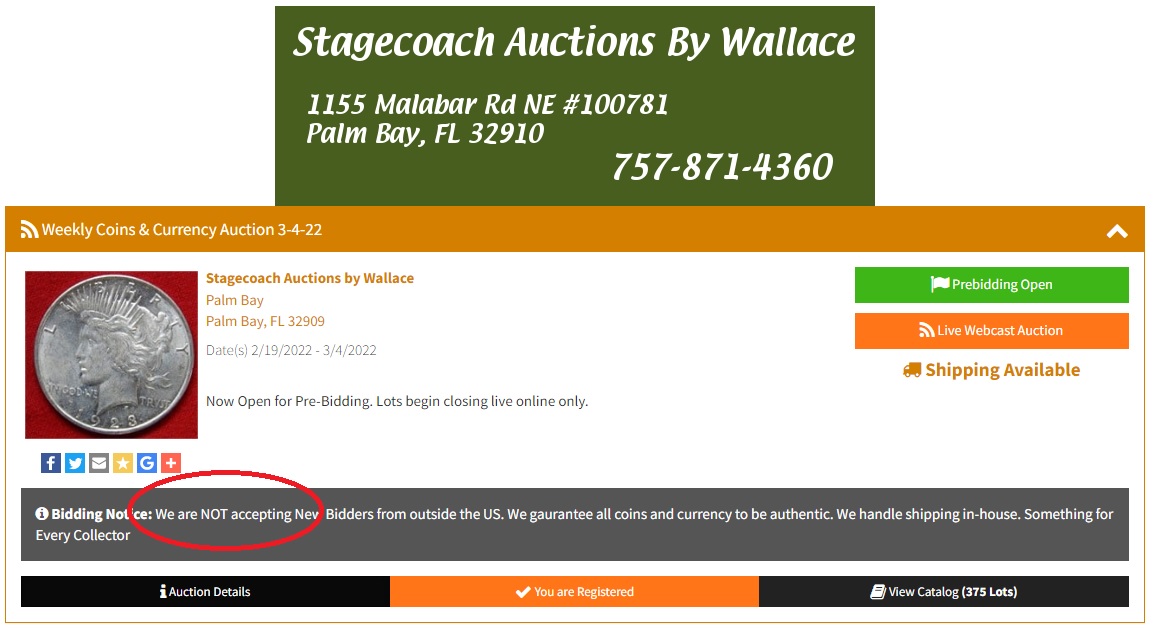 Sheena Wallace, owner of Auctions by Wallace, has been one of my most trusted coin auctioneers for more than a decade, first on Proxibid and later on HiBid.com. This week I saw a notice on her platform, banning new Canadian bidders. She has since expanded that to all international bidders.

When I see such alerts, I usually contact the auctioneer for an explanation, as that informs me and Coin Update bidders about issues that may affect our transactions.

For instance, I did not know that HiBid scores individual bidders as to their reliability and ability to pay. When bidders are rejected, Sheena explains, that lowers their individual score because it is assumed the ban was for a good reason.

When Sheena looked into this, she discovered that an auction house in Canada bans every U.S. bidder. This complicates screening.

I have not investigated her Canadian auction claim for two reasons. My intent is to share Sheena’s viewpoint, not to call out a specific company. I have profiled her before on similar issues for Coin World and Coin Update. More important, if I tried to register at this Canadian auction and was banned, my HiBid score might be impacted.

Sheena contacted Auction Flex, the company that manages HiBid software, to see she could block people in other countries from registering in her auction with no updates to that person’s reliability score.

This complication highlighted a bigger issue. It is one thing for Sheena to be concerned about a Canadian auction eroding the scores of bidders who might later patronize her auction. But why should this result in her wanting to block international bidders?

The plot thickens, with implications that might affect Coin Update viewers who bid in online auctions.

Sheena reports that HiBid continues to grow in Canada, which should be a good thing. “But it is not.” In fact, she adds, the same issues arise with bidders from other countries. Canada was singled out because their auctions are becoming numerous on HiBid.

When new bidders outside of the U.S. win lots, those transactions are almost never completed, she says. “Canadian buyers want me to use other apps to process their payment that my bank will not accept due to fraudulent activity. Also, my terms state what forms of payment we will accept, and I am not willing to set up new accounts.”

Then there is shipping. “Shipping costs more and bidders always complain about the cost. It takes us more time to ship outside of the country due to the paperwork. We are almost always asked to lie about the disclosure of what is being shipped to keep taxes down on their end.” Sheena refuses to lie about the contents of a package. Should any be inspected, she adds, “I don’t want to deal with those ramifications to my business and myself personally.”

In the end, she notes, those complications affect her bottom line. “When the sale isn’t completed we lose money. I would rather sell an item for less and complete the process.”

When problems arise, she has to contact consignors, explain the issue and then, depending on their wishes, either return the coins to them or relist them for a future auction.

“The process of completing the sale is too time-consuming from bidders outside the U.S.,” she says. “I do not need bidders attempting to dictate how I run my business after they have agreed to our terms.  We focus on quick turnarounds for shipping, and getting the next 300+ lot auction posted with minimal errors.”

How does this affect you?

To Sheena’s credit, she has not passed along increased costs to current bidders. She still charges a reasonable 15% buyer’s fee. Many auctioneers on HiBid, Proxibid, Live Auctioneers and other venues charge 18% or higher.

Higher fees impact the bidder’s bottom line. Case in point: I have known another auctioneer as long as I have known Sheena. He charges 23% via Proxibid. I no longer even look at his auctions because of that fee.

Conversely, I eagerly await each one that Sheena lists on HiBid.

Bidding online with the pros