The spring Baltimore Whitman Expo is one again upon us, and with it comes a grand total of 12 individual auction sessions organized by Stack’s Bowers. A large number of lots will offer an impressive variety of collectibles ranging from exonumia to United States coinage to United States Paper Money. Lots will be offered in floor sessions as well as online.

While there are many highlights scattered throughout the various sessions (including the middle and late dates of the Twin Leaf collection of large cents), we’ll pay particular attention to session 4, which has been called “Rarities Night,” and will be held on March 31. The lots discussed in this preview, as well as all others sold in the auction, can be viewed on the Stack’s Bowers Web site.

The first coin we will consider is a 1853 Braided Hair large cent, graded MS-66RD by PCGS and stickered by CAC. During the Rarities Night sale, it will be offered as lot 13017. Considered to be one of the finest coins of this type in existence, it is hard to imagine how a piece like this survived in such remarkable condition. As most people know, it is not all that easy to find a bright red cent in circulation that was minted just last year, so the survival of a coin from the middle of the 19th century with full red surfaces is nothing short of a miracle.

The circumstances must have been just right for this coin to survive at this grade level, and it is very seldom improved upon by any of the large cents from the 1850s. These coins were meant to circulate, and many did. If they were saved, they generally wore down to VF or XF condition, which is how these coins are most often encountered. 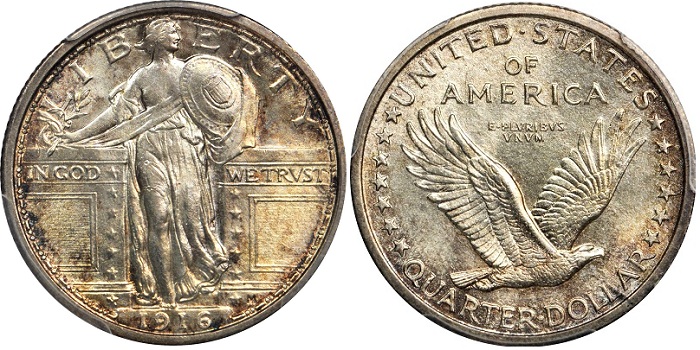 Lot 13066  is a 20th century rarity that has to be on the wishlist of many collectors. The coin, a 1916 Standing Liberty quarter, is one of the finest examples extant of this first-year issue, and has been graded MS-66FH by PCGS. While there have been just over a dozen certified by PCGS at this level (a number no doubt inflated by re-submissions), only seven coins have been certified finer, making this a special opportunity for the date collector.

The rarity of this date is well-known, as only 52,000 coins were struck; most disappeared into circulation and survivors are usually certified at the lower grade levels. Uncirculated survivors are very rare, and it is uncommon for a coin at this level to be offered at auction. 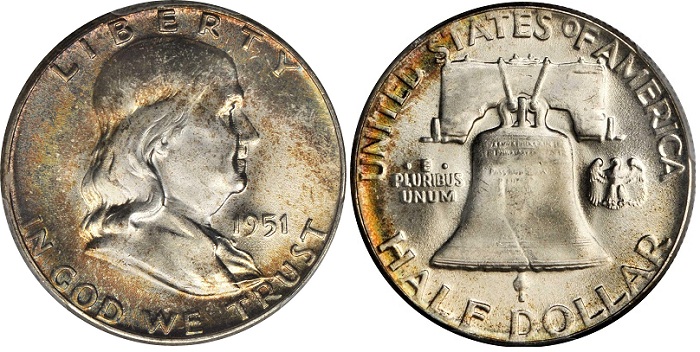 Moving on to lot 13090, we’ll stay in the 20th century with a coin that many people would overlook if found raw in a box at a coin show (which is unlikely). The coin is one of the finest 1951 Franklin half dollars in existence, graded MS-67FBL by PCGS, a grade that only six coins have managed to receive (including possible re-submissions).

Though this is a coin that many people would consider common at first glance, it is a major grade rarity, as most Franklin half dollars have too many scattered marks, a weak strike (denoted by the bell lines on the reverse, which are “full” on this coin), or a combination of both, which prevents them from receiving such a lofty grade. Because of this, the coin offered as lot 13090 is a modern rarity that will easily bring five figures at auction from a collector who will only settle for the finest. 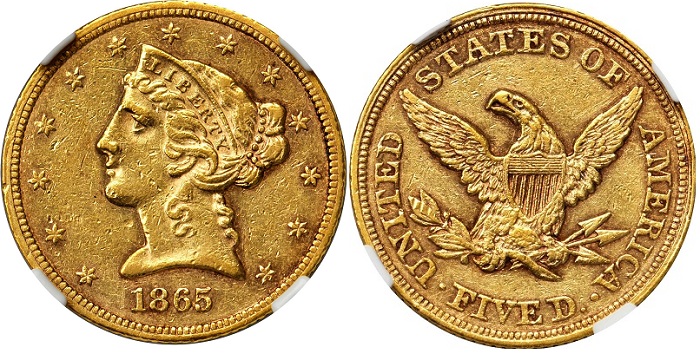 The American Civil War had a detrimental effect on gold coin production at the Philadelphia Mint. With the nation in turmoil, mintages plummeted, creating numerous rarities in the Liberty Gold series. One such coin is the 1865 Half Eagle, which had a mintage of just 1,270 coins struck for circulation, plus a small number of Proofs for collectors. Lot 13188, graded AU-55 by NGC, is one of the very few survivors of this date.

From the original mintage there are probably about 40-50 coins still in existence, and virtually all of them show varying degrees of wear from circulation. Don’t forget that this coin was struck right around the end of the Civil War, and much money was needed for the reconstruction of the areas and economy destroyed in the conflict. As a result, many were melted, exported, or otherwise destroyed, and the majority of survivors will grade VF or XF at best. Coins grading a problem-free AU are very rare, and there are probably no more than few pieces in Uncirculated condition in existence. 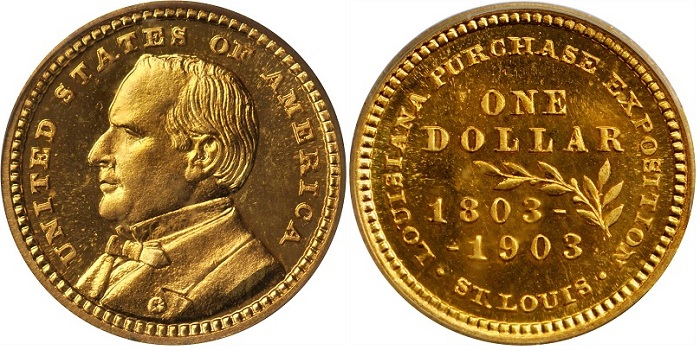 The final lot we will discuss contains something rather unusual. If you follow our auction previews, you will notice that there is a lack of early Proof commemoratives mentioned. The reason for this is simple: they were not produced regularly or in quantity, and any survivors are major rarities. When it is a gold commemorative, which were limited to begin with, there are very few coins to go around. However, one such coin is offered as lot 13244. It is a 1903 gold dollar commemorative struck to commemorate the centennial Louisiana Purchase, graded PR-65CAM by PCGS and stickered by CAC. It features the portrait of President McKinley on the obverse, and was struck alongside another commemorative gold dollar that featured the bust of Thomas Jefferson.

The coin was the first gold commemorative struck in the United States, though some might make a case for the 1848 “CAL” Quarter Eagles, which could technically be classified as commemoratives but are generally not included in the series. Just 100 Proof examples were struck of both varieties of the 1903 McKinley gold dollar, distributed in frames that contained the coins and a certificate of authenticity. Virtually all the coins have been removed from the frames, and most of the infrequent offerings are for individual coins, as is the case in the present auction. Needless to say, with such a low mintage, survivors are rare, and these pieces are always in high demand from commemorative specialists.