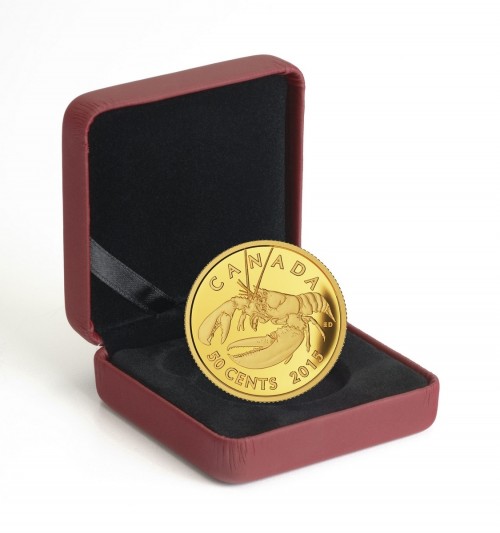 The Royal Canadian Mint have launched their latest 1/25th ounce small gold coin featuring the Atlantic lobster, the pride of Atlantic Canada. The lobster, or Homarus americanus, has become a cultural icon not only for its appeal to seafood lovers, but as an important part of the area’s rich marine heritage. This nocturnal crustacean can be found crawling along the seabed of the Gulf of St. Lawrence and the Northwest Atlantic Ocean, where warmer summer temperatures draw it into shallower waters. In this murky habitat the lobster’s vision is able to detect movement, but little else; instead, it relies on heightened senses of taste, touch, and smell to interact with its environment in way scientists are still uncovering today. Lobsters harvested in Atlantic Canada are typically olive or brownish-colored, becoming orange-red once they’ve been cooked. The largest lobster on record was caught off-shore of the province of Nova Scotia, weighing 20.14 kilograms (about 44 pounds) at more than 110 centimeters (43 inches) long, it was estimated to have been at least one hundred years old! An unusual fact about these popular crustaceans is that they have the ability to regenerate missing legs or claws by crawling out of their old shell during molting. This briefly leaves them soft-shelled, during which time they use sea water to fill extra space, allowing for growth before the new shell hardens completely. And, like humans, the lobster can be right or left-handed, depending on which side its crusher claw is on. 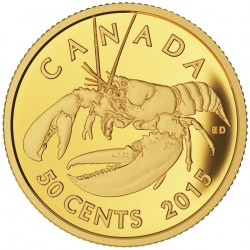 The small gold coin is designed by Canadian artist Emily Damstra and features a three-quarter profile of a Canadian Atlantic lobster. Finely-detailed engraving recreates the lobster’s characteristic features, from the bumpy “teeth” on the claws to the sensory bristles along the edges of its tail. The long pair of antennae, which are sensitive to the touch and chemicals, rise up past the image field while the shorter antennules are pointed forward to help the lobster react to its surroundings. Our lobster walks along the seabed on its eight walking legs. The lobster’s claws are prominently displayed; its large, big-toothed crusher claw and the fine-edged ripper claw are opened slightly, ready to grip any prey encountered. The obverse includes the effigy of HM Queen Elizabeth II as designed by Susanna Blunt and seen on all Canadian circulation, including many commemorative coins, since 2003. 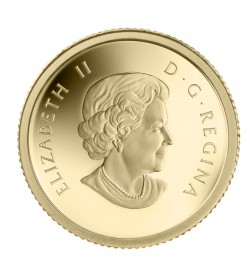 The coin is packaged in a branded RCM presentation box with certificate and is available either on-line or from the Royal Canadian Mint’s retail shops in Vancouver, Ottawa, and Winnipeg. For more information on this and other coins offered by the Royal Canadian Mint, please visit their website. Information offered in English & French, international orders dispatched where applicable.