The government and treasury of Ascension Island has launched (29th March) three coins celebrating a milestone birthday of HM Queen Elizabeth II, who will turn 90 on April 21 of this year. Born in 1926, Elizabeth was the first child of His Royal Highness the Duke of York and the first grandchild of then-King George V, who saw her as the hope and future of the royal family. 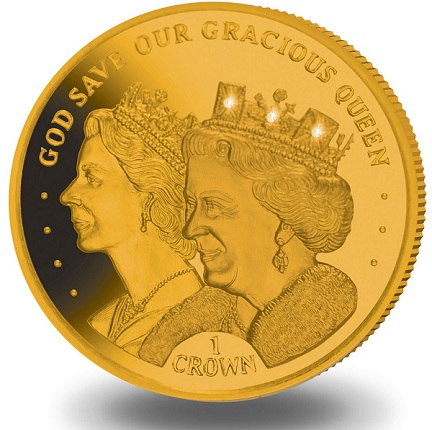 Elizabeth Alexandra Mary was born on in the London home of her maternal grandparents, the Earl & Countess of Strathmore. She was expected to have a very different life, but her destiny changed remarkably when in December of 1936 her uncle, the newly proclaimed King Edward VIII, renounced his throne in favor of the twice-divorced American woman he intended to marry.

Many of his subjects around the world saw this act as a dereliction of duty to the nation and empire, while others considered it to be one of the great love stories of the 20th century. In any event, this girl, who may have had a much less public life had events been different, now became heiress to the British order of succession to the throne, after the accession of her father who succeeded his brother as King George VI.

The world watched Princess Elizabeth grow up, and she went on to become the most photographed girl, and later woman, on the planet. She was an active member of the British armed services during the Second World War, joining the Auxiliary Territorial Service and training as a driver and mechanic. She witnessed the victory of Allied forces in 1945 and her popularity throughout the British empire continued to grow. In 1947, at the age of 21, she married a former Prince of Greece in what was said to have been very much a love match.

Elizabeth and her new husband, Prince Philip, who became the Duke of Edinburgh upon his marriage, assumed their public duties, with Prince Philip carrying on with his naval career where possible. Their idyllic life came to an abrupt end when in February of 1952 Princess Elizabeth’s father King George VI died suddenly from complications arising from lung cancer. The 25-year-old Princess was now Queen of Great Britain, ruling over a quarter of the world’s known land mass and population through the evolving British Empire and commonwealth.

Queen Elizabeth II has witnessed from a unique vantage point the political, social, and economic changes undergone by the U.K. and the world, including a shift in the balance of world power, with the United States growing in international influence and military dominance. Since her accession in 1952, the Queen has reigned long enough to see eleven consecutive U.S. Presidents, eleven French Presidents, and six leaders of the USSR. In April of 2005, the Queen became the most senior European head of state after the death of Monaco’s Prince Rainier III, who had reigned since 1949. 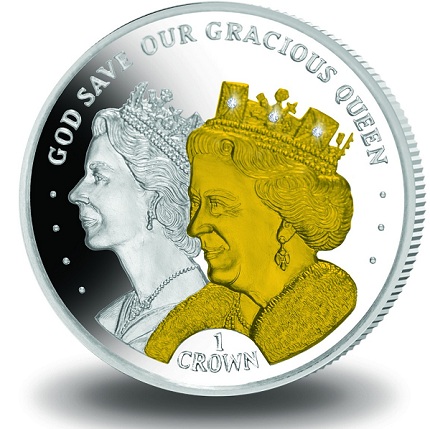 Queen Elizabeth II was named head of the Commonwealth of Nations upon her accession to the British throne and has continued in this capacity since. She has presided over the independence ceremonies of countless countries and territories within the British Empire, seeing them evolve into independent countries within the Commonwealth, which now stands at 53 sovereign states and British dependencies.

The coins, produced by the Pobjoy mint UK on behalf of the Treasury of Ascension, are minted in both gold and silver; among these is a five-ounce silver coin. All three are struck to Proof quality.

The reverse design includes left-facing conjoined portraits of the Queen as she appeared in 1952 and today. The text GOD SAVE OUR GRACIOUS QUEEN is placed above the portraits. Both the gold and silver crown coins are struck to high relief. On the silver examples, the current portrait of Her Majesty is gold plated, and three diamonds are inset into her crown on all versions. 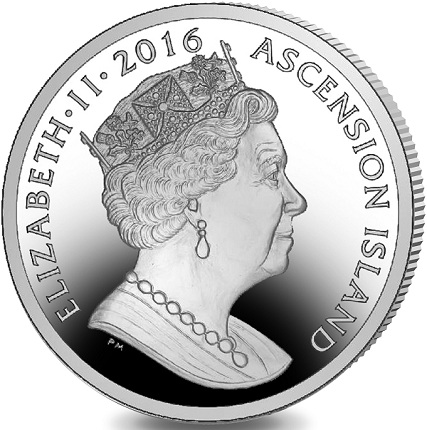 The obverse includes the Queen’s effigy, which is designed by the Pobjoy Mint and is exclusive to their own use.

The one-ounce High Relief Fine Gold with Diamonds coin is limited to 62 pieces that represent the number of gun salutes that annually take place at the Tower of London on the Queen’s birthday. Twenty-one is the standard gun salute, which is combined with an extra 20 as the Tower is a Royal Palace, and 21 more that represent the city of London. The issue limit for the one-ounce silver coin has been set to 600 pieces only. This number represents the 600 charities of which the Queen is a patron.

For more information on this and other coins on offer by the Government of Ascension Island, please visit the Web site of the Pobjoy Mint. International orders will be dispatched where applicable.