The art of artificial toning is not in the alchemy but in the ability to identify natural vs. chemical patina.

Some tones happen naturally because coins are stored in various types of cloth or cardboard holders containing sulfur or other compounds and materials that interact over time with copper, nickel and silver. However, because toned and rainbow-colored coins command such high premiums on the open market, coin doctors increasingly are plying their deceptive trade in online auctions.

Many auctioneers unfamiliar with numismatics display coins online with blurred or hazy photography. These auctioneers can be targeted by coin doctors who then provide descriptions of their wares, further enhancing the fabrication. In some cases, coin doctors sell their own lots online and not only create fake tones on coins but also enhance color using software like Photoshop.

There are numerous ways to create a rainbow of hues on metals, most of which fall under the category of coin doctoring. I will not disclose those methods here for ethical reasons.

Rather, I will share photos of coins that display chemical vs. natural patina and explain how you can identify both.

Let’s start with how natural patina should look. Click on the pictures to expand them. 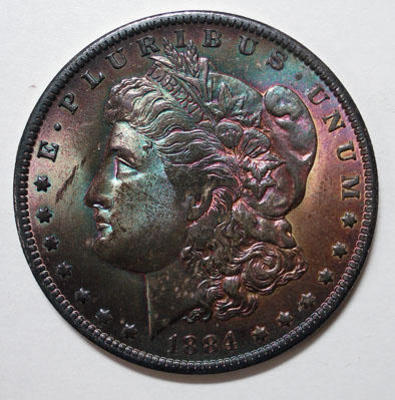 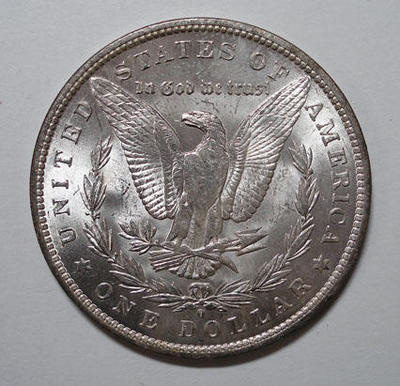 Photos No. 1 and 2 are the obverse and reverse of an 1884-O Morgan Dollar. Note how the rich rainbow hues blend from blue to magenta to lighter shades of rose and gold near Lady Liberty’s cap. The reverse is blast white, which is what you want to see on authentic rainbow coins. That means one side of the coin was exposed to materials over time that caused the patina and the other side was kept free from reaction.

A majority of rainbowed coins fall into this category.

I purchased this coin for $70 on Proxibid, and it graded MS64 by PCGS. Value is about double. 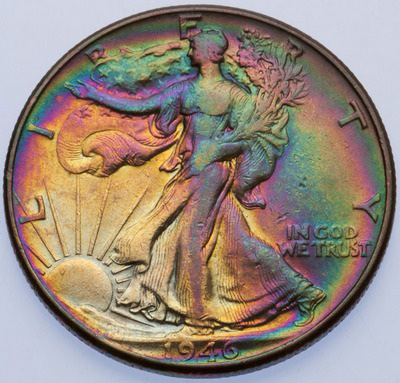 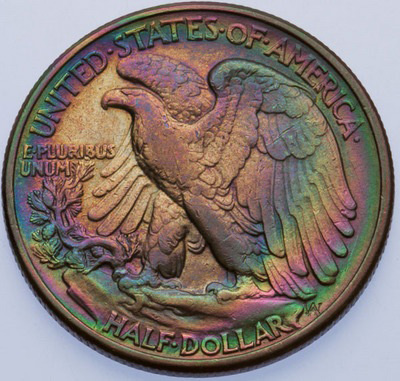 Photos No. 3 and 4 are the obverse and reverse of a doctored 1946 Walking Liberty half dollar. Things to note here are how colors do not blend in natural hues from one shade to another, but virtually stand alone. Worse, the colors especially on the reverse look as if painted on in measured circles. Especially important is the telltale grainy and almost cloth-like texture of the toning–usually a clear giveaway that a coin has been doctored.

Real patina has a sheen often mirror-like in the right light.

Natural patina also can develop on both sides of a coin, as Photo No. 5 (showing obverse and reverse) illustrates. The obverse and reverse of the 1882-S Morgan Dollar show excellent bright rim and blended tones that would shine mirror-like in the right light. 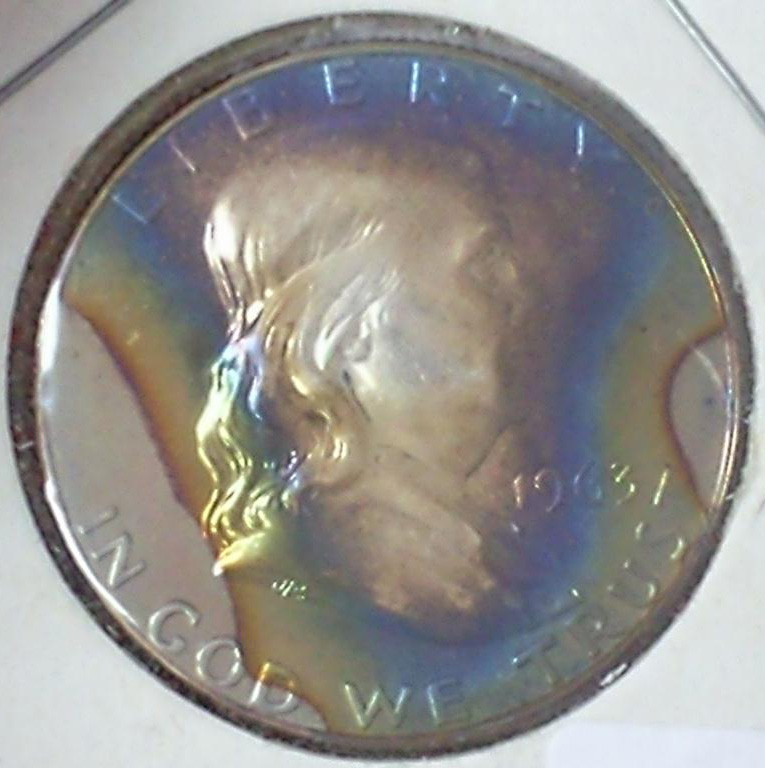 Compare the colors there with the obvious chemical treatment dripping on the obverse of the 1963 Franklin half illustrated in Photo No. 6. You can even note the splash pattern of the chemical on this particular coin. Avoid these at all costs! 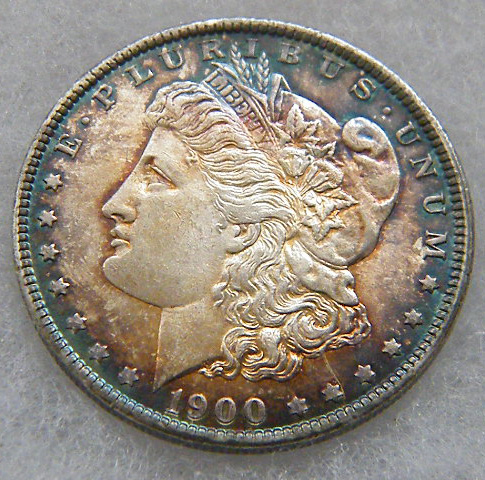 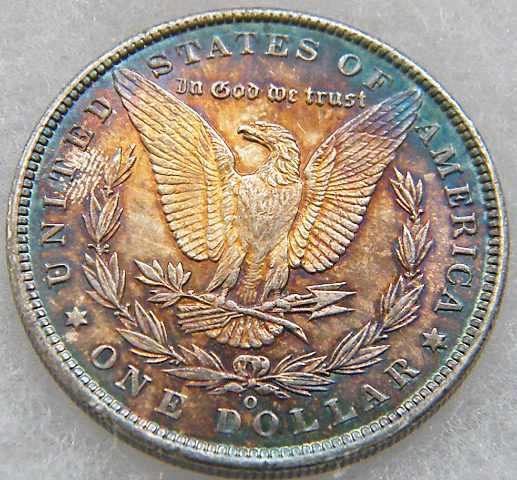 Also beware of silver that has been cleaned and that eventually develops a specific type of toning, almost a tie-died like pattern of blue and sometimes magenta, as in Photos No. 7 and 8 of a 1900-O Morgan Dollar. Because both sides of this particular coin were cleaned, they developed that same tie-died, washed-out look. 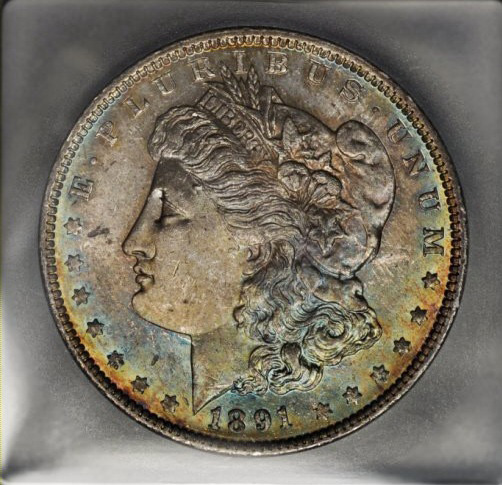 Finally, some coin doctors are so skilled at fabricating tone that you won’t always be able to tell man-made from natural patina. In an online estate auction, if you see such coins, take note if all the rainbowed lots are common dates (as is often the case with Morgan dollars). Coin doctors are basically greedy and don’t want to risk ruining rarer coins if their alchemy fails.

So if you see a coin as illustrated in Photo #10, showing the obverse and reverse of an 1878 Carson City Morgan–containing all the best attributes discussed in this post–then you might feel safer placing higher bids to possess that magnificent patina in your collection.