The Central Bank of Armenia have issued (22nd November) a new commemorative bank note which pays homage to the story of Noah’s Ark — a biblical story which has a particular connection to the land of Armenia and its people. In the Book of Genesis, the Mountains of Ararat are the place where Noah’s Ark came to rest after the great flood. Near the top of Mount Ararat — long considered a historical symbol of Armenian identity, explorers claim to have found Noah’s Ark. A team of evangelical Christian explorers claim they’ve found the remains of Noah’s Ark beneath snow and volcanic debris on Mount Ararat, in present-day Turkey.

The 2017-dated bank note with the denomination of 500 drams is printed on an alternative to traditional cotton fibre paper, which combines paper covered with thin polyester layers on both sides and was developed by the German-based company Louisenthal, a subsidiary of the technology company Giesecke & Devrient, who are a recognised and leading international manufacturer of bank note paper, security paper, and security features. The Hybrid bank note substrate is currently promoted as bringing the advantages of paper bank notes and polymer bank notes together in an innovative combination of protective polyester film around a cotton fibre core. Hybrid substrate bank notes are in circulation on four continents (Africa, America, Asia and Europe) which combines security with durability.

The note which is gold, grey, brown, and blue in colour measures 140 x 76 millimetres and incorporates a variety of the latest security features including a multi-tone watermark with an image of Noah’s Ark and the two-tone watermark reflecting the nominal value of the bank note. An optically variable ink security feature on the face of the bank note is in the form of a dove with an olive branch in its mouth, the colour shifting effect variates from gold to green in bright “swimming” 3-D circles. A transparent window is placed almost in the centre above the image of the Monastery of Etchmiadzin, which is a precisely defined stylised image of Noah’s Ark.


Of particular focus is a KINEGRAM security foil application on the face of the bank note containing a 3-D image of the Noah’s Ark fragment with dynamic and colour shifting effects from gold to green, as well as bright patterns in the upper and lower parts of the Noah’s Ark reliquary. 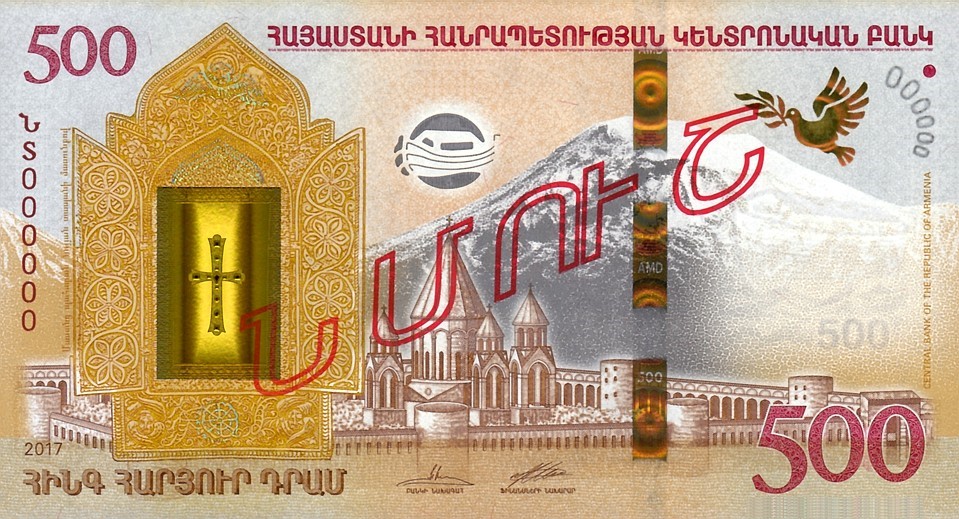 The face of the note includes images of a reliquary (a container for relics) with a fragment of Noah’s Ark and the Monastery of Etchmiadzin. In the background is the familiar view of Mount Ararat. 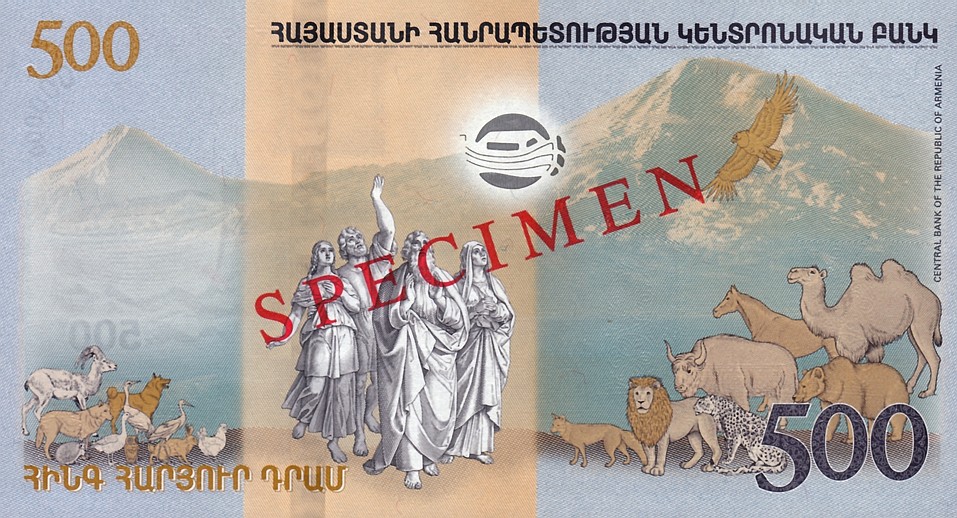 The back shows a depiction of Noah and his family with animals and birds said to have boarded the famed Ark two-by-two around them. In the background is an image of Mount Ararat.

Greece: Famed artist is featured on first Greek collector coin to include colour