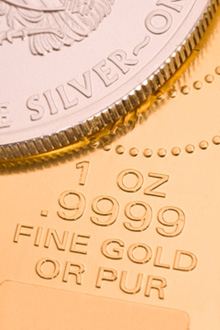 The decision to own gold or silver usually involves more than simply making a decision to diversify an investment portfolio or to choose assets with a long-term positive track record. For a lot of people, the choice to own gold or silver signifies taking responsibility for one’s financial well-being instead of depending on the competence and good will of the US government.

The underlying problem is that the interests of the American people are not the same as those of the politicians and government bureaucrats. In many instances, they are diametrically opposed to each other.

The interests of the American people include the freedom to choose their own lifestyle and to benefit from the efforts they undertake on their own behalf (which is accompanied by the responsibility to suffer the negative consequences from making poor choices). In such a society, people are encouraged to cooperate with each other through voluntary exchange for mutual benefit. If people seek to maximize their economic gain, then discrimination on any basis other than merit is minimized. People who are free to enjoy their own life, liberty, property, and pursuit of happiness tend to feel more benevolent to extend the same rights to others. There are numerous examples in history that free or relatively free people are far more productive and cooperative, benefiting society as a whole, than people who are not free. The United States of America, for much of its history, was a shining example of the fruits of liberty.

The interests of politicians and government bureaucrats may sometimes include some of these interests as a means toward achieving other ends. Generally, though, the interests of the politicians and bureaucrats in power are to stay in power. In a republic or democracy, that usually means exercising power in such a way so as to increase the likelihood of reelection. In order to secure reelection, there is a powerful incentive to violate the rights to life, liberty, property, and the pursuit of happiness of a minority in order to grant special favors (often disguised by calling them “rights”) to the majority of the electorate. Thus, staying in power becomes more important than ensuring people enjoy equal rights of opportunity.

One of the typical side effects of the exercise of government power is having the government become the “solution” to problems. Too often, the problem being “solved” has been created by a previous government intervention. People are discouraged from taking personal responsibility because “the government will do it.” Though it is misplaced, the government encourages people to “trust” those with political power.

Governments, in and of themselves, do not create assets. However, in order to fund the “bread and circuses” used to bribe the masses, governments need assets. So, for governments to have money to spend, assets have to be taken by force from the private sector by one of three methods: taxation, inflation of the money supply, and borrowing. Taxation inflicts damages on those who pay the taxes. Inflating the money supply is effectively a tax on the entire population. Borrowing almost always involves repayment in depreciated currency, which effectively becomes a tax on current and future generations.

For thousands of years, the inevitable result of government control of a nation’s money has been debasement and destruction of the medium of exchange. Eventually, the money depreciated to such a degree that the government, the economy, or the currency collapsed.

Over history, the ownership of fixed weights and purities of gold and silver have protected the interests of people from political and economic havoc inflicted by politicians and bureaucrats.

Today, the US government is repeatedly trying to project an image of being “trustworthy” and “competent to manage the economy.” At the same time that it is trying to pacify its citizens with that image, it is engaging in the very activities that are doing the exact opposite by destroying the US dollar and economy.

It can be intimidating to realize and accept that your own government might be lying to you or hiding some of the truth. Unfortunately, there are many people who find the prospect so scary that they psychologically cannot face the truth. Instead, they will parrot the government line until chaos and collapse are imminent, then ask, “Why didn’t anybody tell me?”

In my articles and radio programs, I try to share truthful information that the US government and the media omit, misrepresent, or fabricate. I’ve absorbed my share of arrows from those who don’t want to hear what I have to say. For many of them, they can delude themselves a little longer by “shooting the messenger.” The truth is out there, whether or not people choose to seek it and take heed.

The choice to acquire and hold gold and silver thereby not only becomes an economic decision, it is also a statement of taking personal responsibility for yourself. It means you have the integrity and self-confidence to choose a different path that is contrary to the preference of politicians and bureaucrats. Over the past ten years, the choice to own gold and silver has been most rewarding. In my judgment, the good news is that the major benefits of owning precious metals will be realized in the future.

Are you responsible enough to own gold and silver?