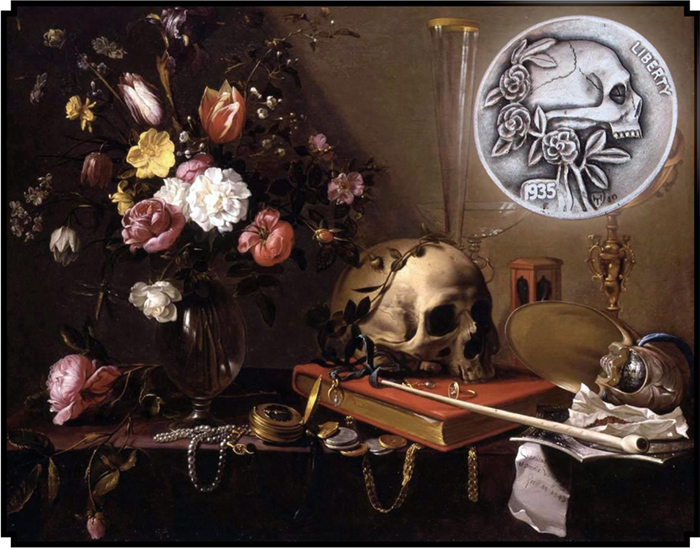 With Halloween closing in, Coin Update editor Diana Plattner has had entirely too much fun assembling a Pinterest collection of ghoulish hobo nickels. The hobo-nickel genre has fascinated Diana for years, since she first joined Whitman Publishing as an editor in 2005. The Pinterest board was almost forgotten in the daily bustle of blog editing, but a recent tweet by Steve Roach (@RoachDotSteve) reminded her: 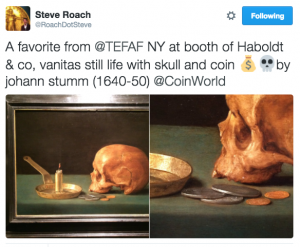 “Vanitas” is a genre of artwork associated closely (although not entirely) with Dutch painters of the 1500s-1600s. These still-life compositions tend to focus on the concept that all human concerns, activities, and desires are mere vanity—when the body dies, the worldly goods laid up by its inhabitant are revealed for what they are: empty, meaningless objects. Highly symbolic, vanitas paintings often depict coveted items like silver candlesticks, books, weapons, jewels, and of course—coins. While looking in delighted horror at the Johann Stumm painting that Steve Roach had posted, Diana realized that hobo nickels go beyond the symbolic role of coins in vanitas art—they are vanitas art.

“Hobo nickel” is a catchall term describing coins that have been used as bas-relief “canvases” on which artists (and non-artists) reshape the existing design into something of their own imagination. Purists limit the term to actual Buffalo nickels, carved by actual hobos during the Depression era—and indeed, those are the most highly collectible representatives of the genre. Take these, for example:

Values established at the time of publication, and may or may not reflect the current state of the market. Readers should consult a reliable dealer or collector who is experienced in the hobo-nickel market before making any purchases.

The chart above is from A Guide Book of U.S. Tokens and Medals, by Katherine Jaeger (now Katherine de Silva). She writes,

Coins have been engraved by artisans into pocket-sized tokens of affection, shaped by prison inmates into tiny teapots, and carved by hoboes into works of folk art. They have had their reliefs pushed higher, their blank fields cut away, their designs enameled in color, and their symbolic elements altered from patriotic to bawdy themes. . . . Half dollars and dollars have been hollowed out to create tiny hinged boxes, in which to conceal a lock of hair, a photograph, or a message. [Continued on next page]