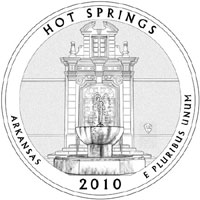 The following events related to coins and coin collecting will take place during the month of April 2010. One of the highlights of the month will be the release of the first America the Beautiful Quarter.

On April 19, 2010, the United States Mint will release into circulation the Hot Springs National Park Quarter. This will represent the first release of the America the Beautiful Quarters series, which will run from 2010 to 2021. During the course of the series, a National Park or National Site from each state, territory, and the District of Columbia will be represented with a unique design on the reverse of a quarter.

The US Mint will release products related to the Hot Springs Quarter to coincide with the circulation release date. Other products released during the month will include the Millard Fillmore $1 Coin Cover and the 2010 Lincoln Cent Two Roll Set.