The 1937 Battle of Antietam Commemorative half dollar (or simply “Antietam,” as it is generally referred to in the numismatic world) is the last in a series of classic commemoratives focusing on the American Civil War. The coin commemorates the Battle of Antietam, sometimes referred to as the Battle of Sharpsburg, which was fought on September 17, 1862 in Washington County, Maryland. Over 12,000 Union soldiers and 10,000 Confederate soldiers died or were wounded on the battlefield that day. While other battles in the war had significantly more casualties, those were fought over multiple days, earning Antietam the status as bloodiest single-day battle in the Civil War.

The half dollar struck to commemorate the event seventy-five years later was produced during the end of the commemorative craze of the 1930s. The era had seen extensive speculation and issues for local events that never warranted a national celebration. As a result, less than half of the 50,000 pieces produced were sold, and a large portion of the original mintage was returned to the Philadelphia Mint to be melted. It is now ranked as a scarce commemorative half dollar and a popular issue. The coin is also one of the few with a distinctive Confederate theme, bearing the portrait of Confederate General Robert E. Lee alongside Union General George B. McClellan.

Fought in the second year of the war that tore the United States in two, the Battle of Antietam was part of the Maryland Campaign, a tactic by Robert E. Lee to invade the North. There were two primary reasons for this; first of all, unlike in the South, northern farms had been mostly untouched by the war, and there was more food available to feed the hungry Confederate Army. Second, a successful invasion of Maryland close to the key city of Baltimore and the capital, Washington D.C. would greatly help the Confederate cause, bringing them closer to victory.

The Union and Confederate armies first fought near South Mountain on September 14, three days before Antietam. It was a Union victory, and Lee regrouped his troops near Sharpsburg on September 15 and 16. The next day McClellan confronted him. The first attack was at dawn, when Maj. Gen. Joseph Hooker attacked the left flank of Lee’s army. Fighting soon spread to a nearby cornfield, where artillery fire became so intense that it was described as “artillery hell” by Col. Stephen Lee after the battle.

The battle lasted the rest of the day and eventually concentrated on a little stone bridge that crossed Antietam Creek. Twelve feet wide and 125 feet long, the bridge saw fierce fighting for most of the afternoon. Confederate Soldiers successfully prevented General Ambrose E. Burnside’s troops from crossing the bridge for a time. But eventually the bridge–later named “Burnside’s bridge”–fell to Union troops. Finally, by 5:30 p.m., the battle ended. While McClellan’s actions during the battle have been regarded as tactically poor, and a definitive Union victory has been disputed, the battle resulted in Abraham Lincoln issuing the Emancipation Proclamation on September 22, less than a week after the battle. 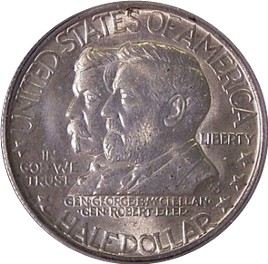 Seventy-five years later, William Marks Simpson was commissioned to design the coin that commemorated the Battle of Antietam. On the obverse, the battle’s two Generals are pictured facing left, with Robert E. Lee in the foreground and George B. McClellan beside him. They are dressed in full military attire. In front of them are IN GOD WE TRUST and two decorative stars. LIBERTY and three more stars are behind them. UNITED STATES AMERICA is found on top, and HALF DOLLAR is near the bottom. Directly below the busts are the ranks and names of both generals. Simpson’s initials, WMS, are found incused directly behind Lee. 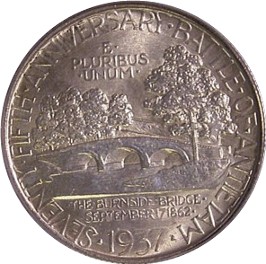 The reverse features Burnside’s bridge, viewed from the side. Antietam Creek is seen with a cluster of trees on its left and a single tree on the right side of the bridge. In the sky above the bridge is E·PLURIBUS·UNUM·, with each word on a separate line. Going almost entirely around the design is ·SEVENTY-FIFTH·ANNIVERSARY·BATTLE·OF·ANTIETAM·, followed by the date at the bottom. Directly above the date in small letters is ·THE BURNSIDE BRIDGE·SEPTEMBER 17 1862·. The fields of both sides appear to have been slightly worked by the artist, perhaps in an attempt to create sky or a more interesting motif, something that we see on other commemoratives of the period as well.

The Act of June 24, 1937 authorized a maximum of 50,000 of these coins. Struck at the Philadelphia Mint that August, they were offered for sale by the Washington County Historical Society for $1.65 each. Unlike many other issues of the same period, there was no ordering limit placed on the issue, which was meant to avoid speculation. By the time the coins went on sale, however, interest from the collecting public was waning, and only 18,000 coins were sold. The remaining 32,000 pieces were returned to the Philadelphia Mint and melted.

The low mintage of the Antietam commemorative half dollar makes for a relatively pricey coin compared to some other commemoratives of the era. For the collector, however, there is plenty of supply in the marketplace and an example can generally be found quite easily at any major show or auction. Most of these show good eye-appeal, with a number of spectacular toned pieces existing beside the regular supply of untoned coins. Population reports show thousands of pieces graded in all grades from MS63 to MS66, and hundreds of MS-67s have been graded by both PCGS and NGC. Both grading services have also graded a small number of MS68s and MS68+s, and the NGC population report even shows a few pieces graded as high as MS69.