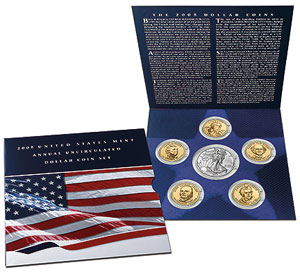 In addition to the collectible 2008-W Silver Eagle, which has a face value of one dollar, the set also contained examples of the five different dollar coins issued for circulation during 2008. This included the four 2008 Presidential Dollars featuring James Monroe, John Quincy Adams, Andrew Jackson, and Martin Van Buren, as well as the 2008 Sacagawea Dollar. Each of these coins was struck with the satin finish used for coins issued within the US Mint’s uncirculated coins sets.

The 2008 Annual Uncirculated Dollar Coin Set first went on sale August 7, 2008 and had been available continuously until the sell out. This product has remained on sale even after the individual 2008-W Uncirculated Silver Eagle sold out in January 2009, and the 2009 version of the coin was announced as canceled in October 2009.