The Royal Australian Mint have launched a new commemorative coin marking the Country’s national dance company, “Australian Ballet”. It was founded in 1962 by J. C. Williamson Theatres Ltd. and the Australian Elizabethan Theatre Trust along with the English-born dancer, teacher and director Dame Peggy van Praagh as founding artistic director. Today, it is recognized as one of the world’s major international ballet companies.

The Australian Ballet celebrates and honors classical ballet in all its forms and over the past 50 years has left an indelible mark on Australia’s cultural history. The company is currently based in Melbourne and regularly tours to all the major cities within Australia giving approximately 200 performances a year. With this number in mind, the Australian Ballet is therefore, the busiest ballet company in the world. 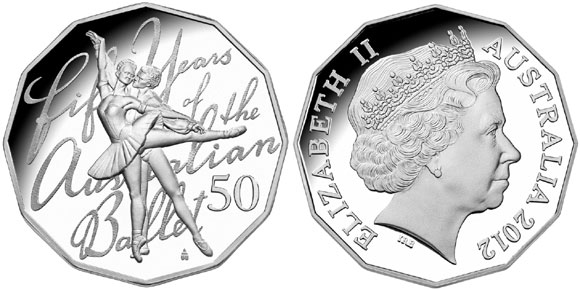 The coin brings the art of ballet to coin form in a highly detailed design developed by RAM coin designer Aaron Baggio. The design was inspired by an actual image by photographer Liz Ham of Olivia Bell and Adam Bull, principal artists of The Australian Ballet. Behind the graceful couple, the text in stylized script reads “FIFTY YEARS OF THE AUSTRALIAN BALLET” along with the coin’s denomination of “50” (cents). The obverse of the coin bears the Ian Rank-Broadley portrait of HM Queen Elizabeth II along with the year of issue, “2012”.

The silver version which is struck to proof quality has a weight of 18.2 grams of .999 fineness with a diameter of 31.6 mm. The coin is also struck as an UNC example in cupro-nickel. For more information on this and other coins offered by the Royal Australian Mint, please visit the website of the RAM at: http://mintissue.ramint.gov.au/mintissue/product.asp?code=210116 International orders are gladly accepted and coins sold outside Australia are exempt from national sales tax.