The Royal Australian Mint have introduced a new coin celebrating the 50th anniversary of the club Surfing Australia. The sport of surfing was introduced to Australia in 1915 by Duke Kahanamoku (1890 – 1968) at Freshwater Beach, New South Wales. Kahanamoku, a native Hawaiian who was a five-time Olympic swimming champion, eventually excelled in other sports including volleyball and surfing. He began demonstrating the wave-riding activity mainly known only in Hawaii during swimming exhibitions. One such exhibition took place at Freshwater beach on the 21st November and since then surfing has become a past-time and lifestyle not only for Australians but for many enthusiasts around the world – wherever the conditions are favorable to riding the high waves. 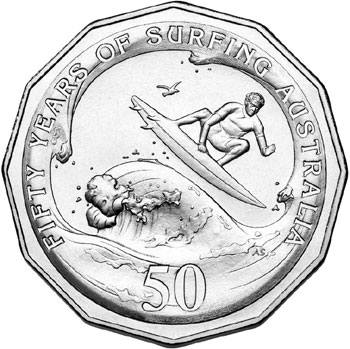 Surfing Australia, established in 1963 as the Australian Surfriders Association, will mark its 50th anniversary and in partnership with the RAM, have launched the new commemorative coin. The coin’s official launch will be held on the 21st November at the Freshwater Surf Life Saving Club in Sydney – in honor of the day when the sport was first demonstrated by Duke Kahanamoku.

The reverse design depicts a proficient surfer being lifted off the waves on his surfboard along with the text “FIFTY YEARS OF SURFING AUSTRALIA” encircling the top portion of the design. The coin’s face value of “50” is placed within the waves and is incused. The obverse depicts HM Queen Elizabeth II as portrayed by artist Ian Rank-Broadley along with the year of issue, “2013”.

The coin is offered in FDC quality and produced in cupro-nickel with a weight of 15.5 grams and a diameter of 31.5 mm, the mintage is unlimited. Packaged in an innovative and eye-catching design, the coin is housed in a surfboard shaped self-supporting presentation folder along with stand. The release of this new coin is the first in a series of events to mark the celebration, culminating in next year’s Australian Surfing Awards on the 20th February 2013.

Orders (including international) are now being accepted at: http://mintissue.ramint.gov.au/mintissue/product.asp?code=310204