This United States Mint has begun sales of the Andrew Johnson Presidential Dollar Coin Cover. This represents the seventeenth release in the American Presidency $1 Coin Cover series that began in 2007. 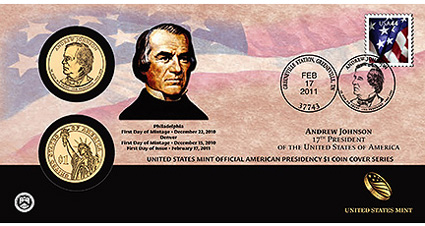 The covers include two Andrew Johnson Presidential Dollars from the first day of production. The Philadelphia Mint coin was struck on December 22, 2010 and the Denver Mint coin was struck on December 15, 2010. The two coins are mounted on an illustrated envelope that has been stamped and canceled on the first day of circulation release February 17, 2011 at Greeneville, Tennessee.

Pricing for the coin covers is $19.95 each, representing an increase of $4.00 from the previous year. The maximum production limit is 22,000 units. The covers for last year carried limits of 32,000, except for the Abraham Lincoln cover, which was limited to 37,000 units.