The United States Mint began sales of the collector rolls of the Andrew Johnson Presidential Dollar on February 23, 2011. The 17th release of the series honoring the former Presidents of the United States was officially released into circulation last week on February 17, 2011, with the occasion marked by a launch ceremony held in Greeneville, Tennessee. 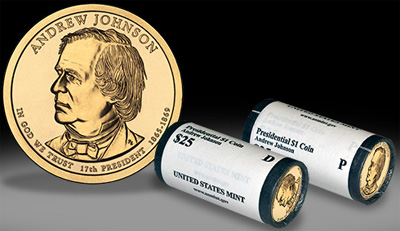 The obverse of the coin features a portrait of Andrew Johnson designed and sculpted by Don Everhart. Inscriptions indicate the President’s name, the order of the Presidency, the years of the term, and “In God We Trust”. The reverse of the coin features an image of the Statue of Liberty, also designed by Everhart, with inscriptions “United States of America” and “$1”. Incused edge lettering includes the date, mint mark, and “E Pluribus Unum”.

Collector rolls containing 25 circulating-quality coins are available from either the Philadelphia or Denver Mint facilities. The custom designed wrappers indicate the release, face value of $25, and mint mark.

The rolls are priced at $39.95 each plus applicable shipping and handing charges. The US Mint increased the prices for many numismatic products this year, including the Presidential Dollars rolls.

Andrew Johnson Presidential Dollars can also be obtained through circulation channels at face value. The Federal Reserve Banks have provided financial institutions with a special ordering period from January 27 to March 3, 2011, during which unmixed quantities of the coins may be ordered.