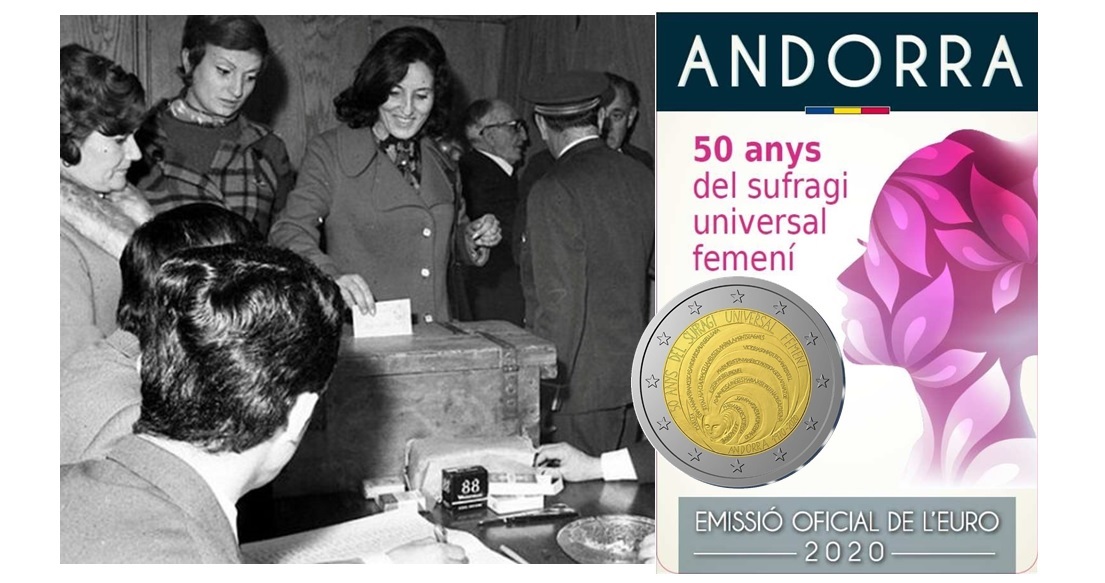 The Servei Emissions Andorra has unveiled the second design for their 2020-dated €2 commemorative coins which celebrate the 50th anniversary of the granting of voting rights to women in Andorra. It was 50 years ago on the 23rd April 1970, that the principality’s constitution was changed to grant women the right to have a say in the governing of the country. The decree was agreed to and signed by both co-princes of Andorra, the president of France, and the Roman Catholic bishop of Urgel. Andorra’s women voted for the first time in the elections held on the 14th December 1971.

The Principality of Andorra is unique in the world, as it is the only country which applies the diarchical, or system of co-rulers, to govern. This arrangement has been in place in this small land-locked country of about 191 square miles and situated in the mountainous range of the Pyrenees since 1278. At the time of granting enfranchisement to Andorra’s female citizens, the population was estimated to be nearly 18,000 citizens with an eligible electorate of about 1,500 persons. With the change in eligibility, that doubled to about 3,000. The shift in Andorran voting eligibility for women was initiated by a group of Andorran women who filed a petition with 378 signatures in the General Council in 1967 demanding their right to vote, as well as the right to be elected. However, a proviso was added in which women were accorded the right whose families were resident in the principality for two or more generations, which was also in effect for Andorran men. A further change came in September 1973, when women were also accorded the right to stand for various regional and national political offices.

Andorra’s modern parliamentary history began in 1866 when the centuries-old Consell de la Terra, in place since 1419 and which included the election of counsellors by the heads of families were replaced with the Consell General de les Valls. This body was itself replaced in 1982 with the Executive Council comprised of directly elected representatives from all seven parishes and some sub-divisions for a total of 28 seats. The Executive Council president acts as head of the government, and there are four councillors with ministerial duties. In 1984, during bi-elections, Mercè Bonell was sworn in as Andorra’s first female counsellor, who served her first and only term of two years. In 1993, a newly revised constitution guaranteeing equal rights of all Andorrans was written and ultimately approved by the Andorran legislature in February of the same year and approved by the Andorran people by referendum in March.

The coins are produced by Spain’s Fabrica Nacional Moneda y Timbre — Casa Real de la Moneda and are designed by Ms. Judit Gaset Flinch from Andorra, on behalf of the Servei Emissions. The primary motif depicts a stylised female face along with a pattern of endless moving lines. These lines are formed by the names of Andorran women who contributed to the granting of the franchise of voting rights to women in 1970. The design is in tribute to the solidarity of Andorran women in support for their rights. The inscriptions 50 ANYS DEL SUFRAGI UNIVERSAL FEMENÍ (“50 years of Universal Female Suffrage”) and ANDORRA 1970 – 2020, complete the design. The reverse side is that of the standard euro-zone design for all two-euro circulation-type coins, the numeral 2 superimposed over a map depicting Europe, created by artist Luc Luycx.

The treasury of Andorra began the issue of euro-denominated national coinage in 2014 with the release of eight values from €2 to one cent issued annually. The 2020-dated commemorative €2 coins are scheduled for release towards the fourth quarter of the year and will be presented in a blister-pak folder. For information about this coin and other commemorative coins released by the Andorran treasury, please contact the offices of the Servei Emissions, official distributor, at