The ANA World’s Fair of Money will be held this week in Anaheim, California. In conjunction with the event, both Heritage Auctions and Stack’s Bowers will be organizing several auction sessions. We’ve previously covered Heritage Auctions’s upcoming U.S. and world coins sales, and now we’ll continue with the Stack’s Bowers auctions slated for the same week.

A wide assortment of items will be available for sale, ranging from ancient coins and modern United States pieces in the highest grades to U.S. and world currency, and even numismatic Americana. All of the lots discussed in this preview can be viewed in detail at www.stacksbowers.com. 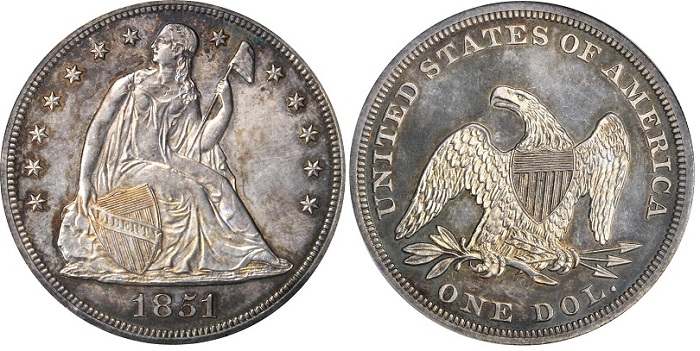 We will start our preview with some lots from Rarities Night, held on August 11, which features a selection of American coinage ranging from 19th century rarities to modern issues in ultra-high grade. Lot 3169 is an 1851 Proof Liberty Seated dollar re-strike, graded PR-62 by PCGS, and stickered by CAC. The 1851 dollar is a rare date as only 1,300 pieces were struck for circulation, with no Proofs produced at the Philadelphia Mint that year. The New Orleans mint, which had struck silver dollars in 1846 and 1850, did not make any that year, and the rarity of this particular coin was already known in the late 1850s.

Starting around the same time and perhaps continuing into the 1870s, clandestine re-strikes were produced by Mint employees and sold to collectors. The coin offered by Stack’s Bowers is clearly such a coin, struck using new dies in Proof format. As a blank, however, a previously struck (and probably circulated) New Orleans Seated dollar was used. While the date is no longer visible, the “O” mint mark clearly is, and it can be seen in the approximate location of a mint mark on regular branch mint issues of this design. This fascinating example illustrates some of the shady practices of the Philadelphia Mint during this period. 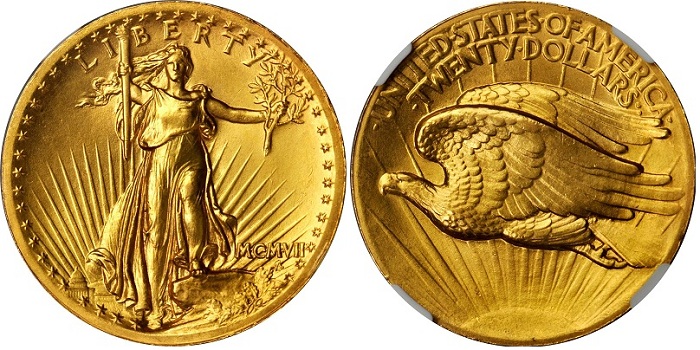 Another worthy coin offered during Rarities Night is lot 3507, a MCMVII (1907) NGC MS-65+ certified high-relief Saint-Gaudens $20 gold piece. The high-relief issue is a famous but short-lived piece that comes closest to the original Saint-Gaudens design (the sculptor passed away before these coins were struck), except for the extremely rare ultra high relief.

Issued in limited numbers — 12,367 were struck for circulation, each receiving three blows from a hydraulic coin press — many were set aside at the time of release. In Gem Uncirculated condition, though, it remains a rarity in extremely high demand. Dubbed one of the most famous coins ever produced by the United States Mint, the design was adjusted to a lower relief after striking problems arose, and it soon became evident that the issue was unfit for large-scale production. The design would continue to be struck for circulation until 1933, when all gold coinage ceased, but none of the subsequent issues could match the beauty of the original design.

The ANA auction also features a session of United States Currency, ranging from colonial issues and national bank notes to military payment certificates and high-denomination bank notes. A true rarity is offered as lot 10339, a PCGS Currency XF-45 certified 1890 Treasury Note (Friedberg-377). Treasury notes were bank notes issued to people that deposited silver in the Treasury under the Sherman act; they were payable in coin (gold and silver), unlike legal tender notes of the same period which were not backed by physical gold and silver.

From a very short-lived series that is mostly known for the $1,000 issue (the “grand watermelon” note), the series 1890 $100 denomination has just 35 confirmed examples known to exist, of which most are well-circulated or impounded permanently in museum collections. Examples in higher grades rarely come up for sale, and when they do they attract considerable attention from currency specialists.

The front features a portrait of David Farragut, U.S. Navy officer during the Civil War, while the back features a predominantly green, intricate design with numerous security features meant to deter counterfeiters. The back design would be replaced in 1891 by a simpler layout, as some claimed it was too difficult to distinguish between real and counterfeit notes of the 1890 issue.

Various sessions of ancient and world coins and currency will be held by Stack’s Bowers during the ANA as well. One of the highlights of the world coin sessions is a relatively modern issue offered as lot 20354. This Czechoslovakia 1934 10 Dukaten commemorative in NGC MS-68 condition is the single finest-known example of an extremely limited issue of just 68 pieces.

Released as part of a set to commemorate the reopening of the Kremnica mint, this large gold coin features an intricate design that, thanks to the rarity of this issue, is not seen by many.  Kremnica, in present-day Slovakia, is a small town that had a mint as early as the 14th century, but the mint was closed and moved to Budapest at the end of World War I, after the region become independent from the Austro-Hungarian empire. The rest of the commemorative coin set, which includes other small denominations with small mintages, is offered by Stack’s Bowers in other lots during the same auction. 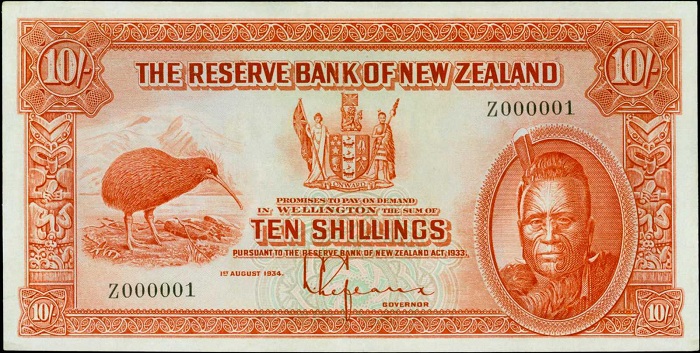 The final item we will consider is part of the world currency auction also held by Stack’s Bowers during the same week. Lot 30347 is a historical item that is arguably the first bank note issued by the Reserve Bank of New Zealand: a 10 shillings note dated 1st August 1934, with serial number of Z000001. Graded Very Choice New 64 by PCGS currency, the bank note traces its pedigree back to A.D. Park, the Secretary of the Treasury of New Zealand at the time of issue. 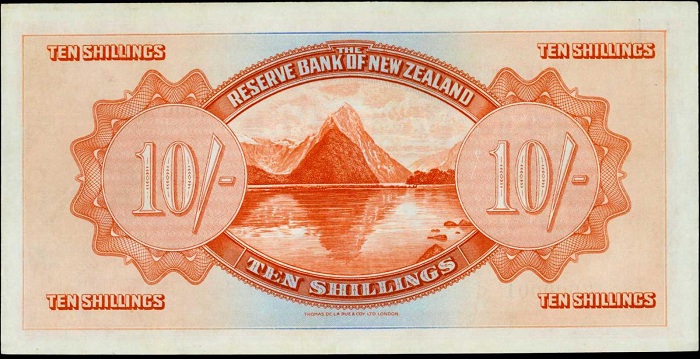 The note itself, with an ordinary serial number, is already a scarce bank note seldom offered for sale in Uncirculated condition. Part of a set of four denominations (10 shillings, 1 pound, 5 pounds, and 50 pounds) printed in England by Thomas de La Rue, it was hastily designed after the creation of the Reserve Bank of New Zealand, before which time various private banks issued notes for the country. The series would remain in use until 1940, when it was replaced by an entirely new design.