The World’s Fair of Money, organized by the American Numismatic Association, will be held this year in Anaheim, California, from August 9 to August 13. The week-long event-filled convention will be accompanied by various auctions offering thousands of US and world coins and currency.

In this second of three previews we will take a look at the World & Ancient Coins sales held by Heritage Auctions. These auctions are divided into multiple sessions, and include sales dedicated to various high-end collections, including the Cape Coral collection of Multiple Talers, the Redwood Collection of Swiss Coins, and Part III of the Rudman Collection of Mexican Coins. All of the coins discussed in this article can be viewed on Heritage’s Web site, along with the other lots offered during the week.

We will start with an extremely rare Greek coin featuring a portrait of one of history’s most famous people. Lot 32024 is a Decadrachm of Alexander the Great, believed to be one of less than twenty pieces extant. Not encapsulated but graded by NGC as a Choice XF with Fine Style (NGC does not use a numerical grading system for ancients), the coin is a larger version of the same design used on the Tetradrachm, a denomination produced for many years at different mints throughout the known world at the time.

While the exact reason for the existence of the larger Decadrachms is not known, it is unlikely that they ever circulated, and it has been suggested that Alexander the Great handed out these pieces during some sort of special ceremony. While it is impossible to know the truth, the fact that the man himself perhaps handled these historical coins makes them important momentos of the Ancient Greek world. The second lot we will consider is part of the Cape Coral collection of Multiple Talers. These silver coins are often large pieces that did not necessarily circulate. Lot 29022 is one of the largest and rarest examples of one of these multiple Talers, a massive 1620-dated 10 Taler coin from Brünswick-Wolfenbüttel, graded MS-61 by NGC. An important piece that traces its pedigree to the Virgil Brand collection, the coin is an impressive example of Renaissance art and a denomination that is seldom encountered at public auction. 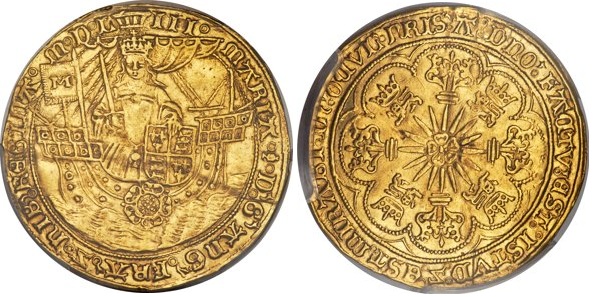 The next lot to discuss is a piece of British numismatic history missing from many advanced collections. Lot 32293 is a gold Ryal graded AU-55 by PCGS and struck during the sole reign of Queen Mary, who would later rule together with her husband Philip of Spain. Dated 1553 in Roman numerals (MDLIII), the piece is a later example of a design that was introduced during the reign of Edward III (second coinage period, 1344-1346).

This extremely rare gold coin was valued at 15 shillings at the time of issue, and there are fewer than 10 pieces known to exist of this particular type, according to the auction catalog. This example traces its pedigree back to a 1900 sale of Sotheby’s and has appeared on the numismatic auction scene just three more times since then, most recently in a 2011 Spink auction.

Another British rarity — arguably the rarest 20th century coin from the British Isles — is lot 32330, believed to be one of just three 1933 pennies in private hands (seven are believed to exist in total, one of which was stolen in 1970 and never recovered). Graded MS-63 BN by NGC, the coin is a legendary issue produced during the reign of George V. It was not struck for circulation, and an extremely limited number of pieces were minted using ordinary dies and planchets.

Three of strikes were requested by the King to be included in year-sets placed in corner stones of new public buildings, including the Church of St. Cross in Middleton near Leeds, St. Mary’s Church at Hawksworth near Leeds, and the Senate House of the University of London. Two were struck for the British Museum and another two were supposedly struck for unknown reasons, ultimately ending up in the hands of private collectors. Mystery has surrounded the exact circumstances of their creation, and to this day not much is known about the coin. 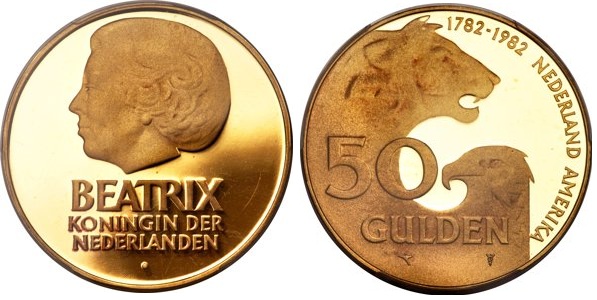 We make another jump in time to discuss a modern rarity that your author had no idea existed, despite having been born and raised in its country of origin. Lot 32412 is a gold striking of a 1982 commemorative 50 Gulden piece, usually struck in silver; it has been graded MS-64 by PCGS, though it should perhaps more correctly be identified as a Proof. This commemorative was made to celebrate the 200th anniversary of Dutch-American relations. In 1782, the Netherlands (or the Dutch Republic, as it was called at the time) became the second nation to recognize the independence of the United States after it had been the first country to salute the American flag on November 16, 1776.

Supposedly six pieces were struck, one of which was presented to Queen Beatrix of the Netherlands, which according to Heritage is the piece now offered for sale, although pedigree information is missing. It seems logical that one piece was offered to the United States during celebrations, but there has been no trace of it since then, and it seems unlikely that any others will suddenly appear on the market.