The World’s Fair of Money, organized by the American Numismatic Association, will be held in Anaheim, CA, this year from August 9 to August 13. The week-long event-filled convention will be accompanied by various auctions offering thousands of United States and world coins and currency. In this, the first of three preview articles, we will take a look at the U.S. coin auctions organized by Heritage Auctions, particularly Platinum Night, which will see rarities offered for auction on the evening of August 10. Full-color photographs and more information can be found on the Heritage Auctions Web site.

Platinum Night features a total of 522 lots ranging from colonial coins to 20th century gold coin rarities. The first lot we will take a look at is from the former category, lot 3920, which is an undated (ca. 1615-16) Sommer Islands Six Pence with small portholes on the reverse, graded AU-50 by NGC. While not struck for the United States proper, their inclusion in the Red Book has for many decades made it a very important part of American numismatic history. 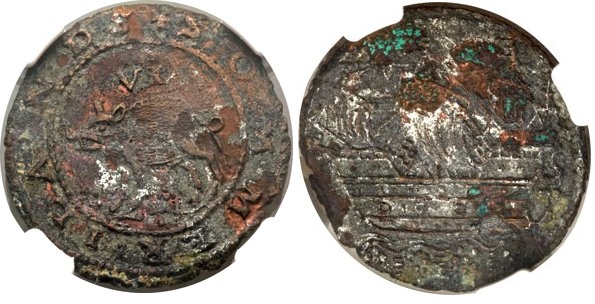 The Sommer Islands are now known as Bermuda and saw one of the first waves of English colonization of North America mere decades after the arrival of Columbus. They also utlilized the first coinage specifically struck for North America, a series of several denominations that would become known as “Hogge Money,” after the wild hog (introduced to the islands by early settlers) displayed on the obverse.

The coins were struck on thin brass planchets and silver-plated in England before being shipped to the island. All surviving pieces show various degrees of corrosion, thanks to the climate of Bermuda and the fact that virtually all survivors were found with metal detectors. This is true of the piece offered by Heritage as well, which is considered to be the finest-known of the variety, with small portholes and some of its original silver plating still visible. 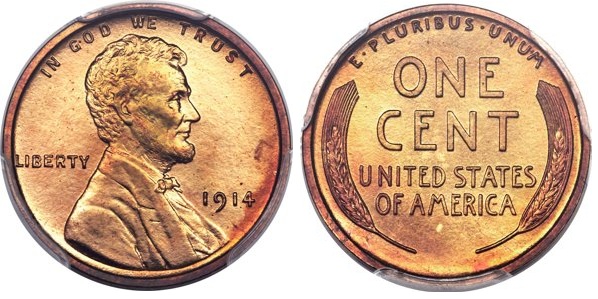 Next we will take a look at something completely different. Lot 3974 is one of just three Matte Proof Lincoln Cents certified PR-68 RD by PCGS. This 1914 Lincoln Cent is tied with a single other example of that date for the finest known at PCGS, while only one other date — 1909 — has seen an example of this type graded this high. Virtually perfect, it is hard to imagine exactly how this particular coin survived in such a lofty state of preservation. Initially distributed to a collector in a five-piece Proof set of the copper and silver coins struck that year, it is amazing that this coin shows almost no signs of handling.

Most Proof coins of this era show up with small hairlines (versus hits or marks usually seen on coins meant for circulation), which can severely limit the grade of any particular piece. Additionally, the copper composition in which these Lincoln Cents were struck tends to tone to a darker color over time. That fact that this particular piece was somehow able to avoid both of these problems means it should see intense bidding interest from advanced collectors when it comes up for sale. 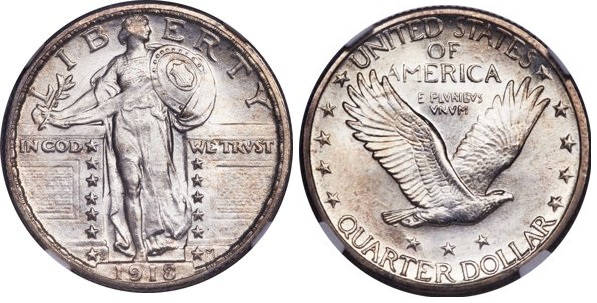 Collecting varieties is extremely popular in American numismatics, and some of them can be major rarities that are quite hard to find. One such coin is offered as lot 4056 and represents one of the finest 1918/7-S Standing Liberty Quarters, graded MS-67 by NGC, and tied with a single other example as the highest-graded example of this variety.

The coin, which shows a very clear over-date, is a variety that is not very well known, but this was not always the case. In fact, it almost took two decades for collectors to notice the over-date; by then all that were struck had been in circulation for many years. As a result, this is a coin that is extremely difficult to find in any grade, and Uncirculated examples are major rarities. Add to that the fact that this is considered to be one of the most weakly struck issues of the series, and it should not come as a surprise that a coin graded MS-67 does not come up for auction very often. In fact, according to the catalog, this is the first time this particular variety has ever been offered for sale at public auction in this condition.

Until 1849, the smallest gold coin struck by the United States Mint was the $2.50 denomination, which was introduced in 1796 and would continue to be struck until 1929. The first year of production saw two different varieties struck for circulation: one without obverse stars and one with sixteen obverse stars, representing the States in the Union at the time. 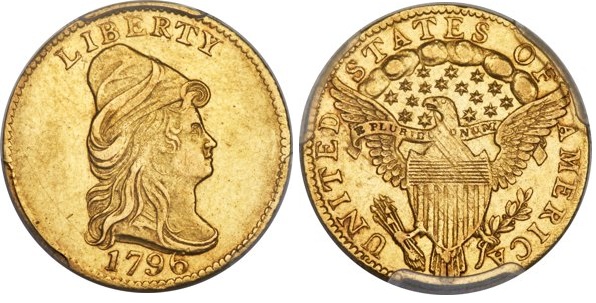 Lot 4253 is an example of the former variety, graded AU-53 by PCGS. Production that year was extremely small, and it is believed that just 963 pieces of the “no stars variety” were struck for circulation. The second variety, which added thirteen obverse stars to the design, saw just 432 pieces minted for circulation — miniscule numbers compared to two larger gold-coin denominations struck that year, which were preferred by people depositing gold for coinage at the Philadelphia Mint. Survivors are very rare in any grade of either variety, and pieces that approach Uncirculated grades are rarities that are seldom encountered. 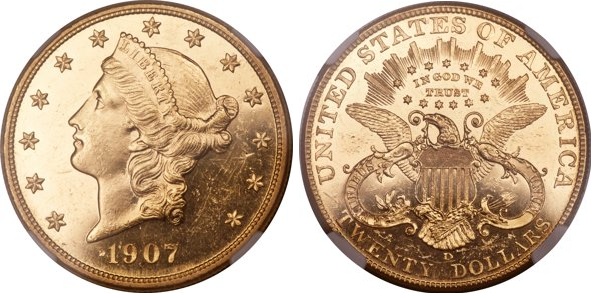 The final lot we will consider is a unique coin that was last offered in January of 2013 and traces its pedigree back to the King Farouk collection. Lot 4363 is the only 1907-D Liberty Double Eagle struck in Proof format, graded PR-62 by NGC. While the exact reason for striking this coin is unknown, it was perhaps done to commemorate the end of the long-lasting design, which was replaced in 1907 after more than half a century of production.

Interestingly, we do know the exact date that this coin was struck, which according to the catalog was September 30, 1907. It then disappeared from the public eye until it showed up at the King Farouk auction, where it was grouped in a large lot of gold coins and received little attention. Since then, however, it has been offered multiple times at auction and has been available on the numismatic market for the last few years. It will be interesting to see how this 20th century rarity fares when it crosses the auction block in Anaheim on August 10.