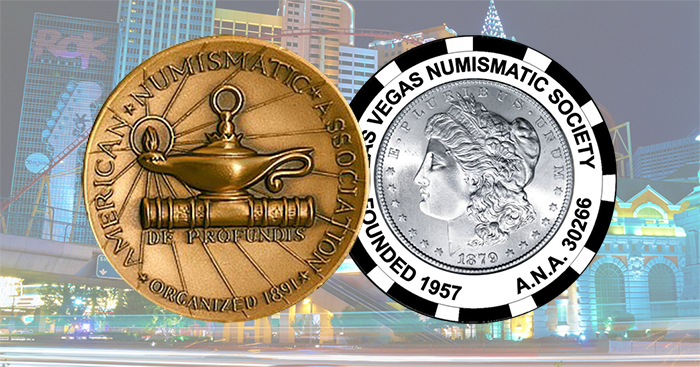 The ANA Road Show gives members and collectors around the country an opportunity to see some of the most impressive items from the ANA’s Edward C. Rochette Money Museum. Items to be displayed at the Diamond Jubilee Coin Show include:

“The ANA Road Show adds an extra level of excitement to the LVNS Diamond Jubilee celebration,” said Fred Kuch, LVNS Trust Chairman. “It’s a fantastic opportunity for hobbyists to see some of the most legendary numismatic treasures from the Money Museum.”

The Las Vegas Numismatic Society Diamond Jubilee Coin Show is open to the public interested in buying and selling rare coins, vintage paper money, and other numismatic rarities. Hours are 10 a.m. to 6 p.m. on Thursday and Friday, May 18 and 19; and from 10 a.m. to 5 p.m. on Saturday, May 20. Visit lasvegascoinclub.com for additional show details.

The ANA’s School of Numismatics is offering an educational seminar—“Fundamentals of Grading U.S. Coins”— on May 16 and 17, immediately prior to the Diamond Jubilee Coin Show.

This two-day seminar will help students learn and understand how United States coins should be graded according to the latest ANA and market standards. Attendees will gain confidence in evaluating surface marks, strike, luster, and eye appeal through interactive discussions, group activities, and individual study of hundreds of coins from the ANA grading set.

Meet a former U.S. Mint director at the World’s Fair of Money