From ancient coins to magnificent issues from the Middle Ages and Modern Era – Numismatik Lanz is presenting quite an extensive offering on December 10th and 11th. The splendid collection of coins from the Middle Ages is particularly impressive and truly something that no connoisseur should miss.

On behalf of Caritas, Numismatik Lanz will be putting the Friedinger-Pranter collection up for auction on December 10 and 11, 2012 in auction no. 155. The collection was bequeathed to the charitable organization, which runs a variety of invaluable projects for a broad spectrum of people in need, including children, people with special needs, seniors and other socially marginalized groups. Anyone who buys coins in this auction not only gets to revel in their acquisitions, but can also enjoy the added knowledge that their purchase helps those currently in need.

Starting off the auction are 16 coins from the world of the Celts. Of particular note here is a hexadrachm dating back to the 1st century BC that features the inscription NONNOS. Its obverse depicts the head of a nymph that is based on a very special type from the city of Terina (No. 5, Estimate: 10,000 EUR). The prototype itself dates all the way back to the years between 440 and 425 BC. People have pointed to this as earliest evidence of a coin collection – J. Lorenz claims that the Celtic ruler Nonnos had a collection of Greek coins at his princely residence, from which he took the example from Terina to show to a craftsman in order to have the exact same type of coins issued in his name. 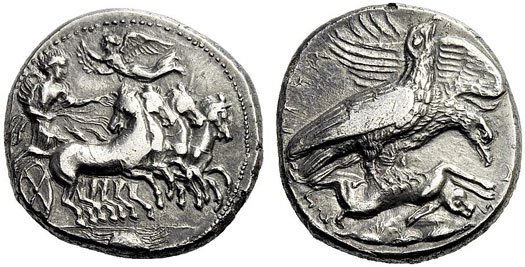 Let’s now take a look at the 346 Greek coins in this auction, among which there are numerous precious pieces just waiting for connoisseurs to discover. Take, for example, a late archaic, extremely fine nomos from Sybaris acquired at the Egger Münzhandlung in Vienna in 1906 for 45 kronen (No. 29; Estimate: 5,000 EUR), or perhaps a tetradrachm from Agrigentum featuring two eagles, gorging on a rabbit (No. 31, Estimate: 6,000 EUR). Incidentally, a dekadrachm of the same type recently became the most expensive ancient coin ever sold in Europe. Also worth noting here is the wonderful tetradrachm from Catane, minted around 450 BC (No. 40, Estimate: 20,000 EUR). It dates back to an auction from Santamaria held in 1961.

The most expensive piece of the entire auction is an extremely fine oktadrachm of Getas, King of the Edonians from 480-460. This coin, which was likely minted in order to render tribute payments to the Persians, features the first use of the term “nomisma.”

A series of about 35 electrum staters and hectes from Cyzicus will also certainly be met with considerable interest from collectors. The offerings here run from striking animal figures all the way to images of the gods and mythological scenes.

This Greek section draws to a close with an extensive series of coins of the Ptolemies. The piece de resistance, however, comes almost at the very end, with one of the rare portraits of Marcus Antonius and Cleopatra’s daughter as wife of the Mauretanian king, Iuba II (No. 360, Estimate: 6,000 EUR).

Up next are roughly 60 coins from the time of the Roman Republic and about 300 coins from the Imperial Era. It’s a veritable paradise for collectors, with historically interesting and/or rare pieces in appealing conditions at collector-friendly estimates that are hard to pass up. Floor bidders are certainly favoured, as they can react quickly when a particularly exciting coin doesn’t immediately invite interest. Numismatik Lanz calls all lots at 60 % of their estimate during the auction, but in post auction sale, bidders have to pay 80 %. With this difference in mind, it certainly pays to have a detailed look at the auction and pay an in-person visit! 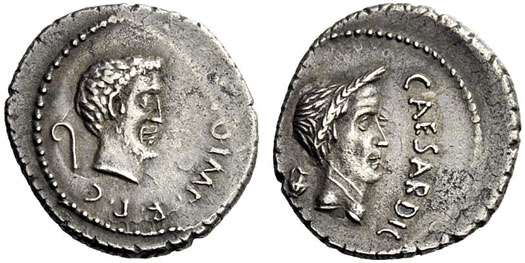 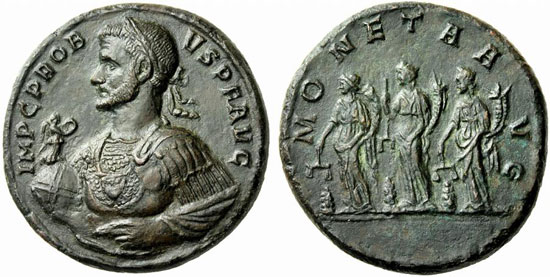 There’s another attraction when we get to Probus. Not only are there antoniniani featuring very rare busts on the obverses, but there’s also an extremely fine aureus featuring a wonderful portrait (No. 681, Estimate: 15,000 EUR) and a bronze medallion showpiece whose reverse depicts the three Monetae (No. 686, Estimate: 20,000 EUR).

The ancient coins section concludes with a selection of Byzantine coins, issues from the Migration Period, and two spintriae.

On December 11th at 2:00 pm, the auction of the Middle Ages collection begins. The material on offer is impressive indeed, and not just as regards the quality and rarity of the pieces, but also the sheer scope: From Frisia in the north all the way to Tyrol in the south, all German regions are represented, and with great rarities. The emphasis is on the High Middle Ages, with one piece after another like a miniature Romanesque artwork. It’s a collection sure to delight the aesthete.

Unfortunately we can only mention a fraction of the almost 300 pieces that await the connoisseur. But don’t be mislead just because we’re highlighting only the top items – there are plenty of interesting lots starting at estimates of 200 EUR / opening prices of 120 EUR. 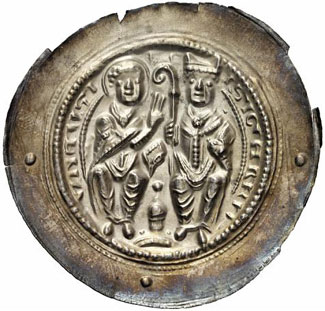 The most significant piece here turns out to be a striking bracteate of Siegfried of Hersfeld Abbey (1180-1200). The abbot, here indicated by an inscription, sits enthroned next to St Wigbert. This is Romanesque art at its absolute best. (No. 835; Estimate: 8,000 EUR). 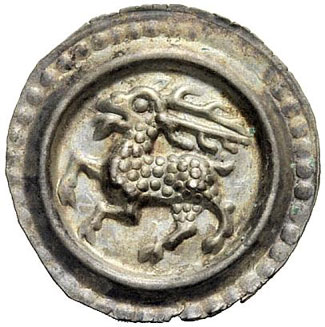 The south is also very well represented, with Bodensee bracteates to be discovered in all the expected rarities. Take, for example, an FDC bracteate from Sigmaringen featuring a stag striding towards the left (No. 950; Estimate: 4,000 EUR).

The foreign coin section starts off at number 1060, with an impressive assortment of medieval coins from Dalmatia. Of particular note is the extremely fine grosso of Balsas III (1403-1421) that features the image of St Laurentius (No. 1068; Estimate: 2,500 EUR). Even more noteworthy is an autonomous city issue from Suaco, of which only 5 specimens exist (No. 1090; Estimate: 15,000 EUR).

The auction ends with foreign coins from the Middle Ages and Modern Era, as well as a comprehensive library with an emphasis on antiquity.

You can find more coins from the Friedinger-Pranter Collection online at: www.taxfreegold.de.