The Finance Ministry of the Netherlands have launched (25th October) two new coins which celebrate and highlight Amsterdam’s famous canal system. The Canal ring, with it’s more than one hundred kilometers of canals and including 90 islands and 1,500 bridges is one primary features of the city known world-wide.

The three main canals of Herengracht, Prinsengracht, and Keizersgracht were dug in the 17th century during the Dutch Golden Age and using the technology prevalent during the era. The many canals form concentric belts around the city, known as the Grachtengordel (Canal District). Much of the area is well known and admired for the quaint scenery and many small bridges built over the canals as well as the numerous 17th-century canal homes still standing. The area is considered historical and unique to world heritage that the canals of Amsterdam were added to the UNESCO World Heritage List in August 2010. The City of Amsterdam celebrates its 400th year of the canal system in 2013 which is considered the successful outcome of careful city planning of the day. What has provided the life-blood to Amsterdam for many centuries has now become a tourism must-see and the backdrop for numerous festivities. 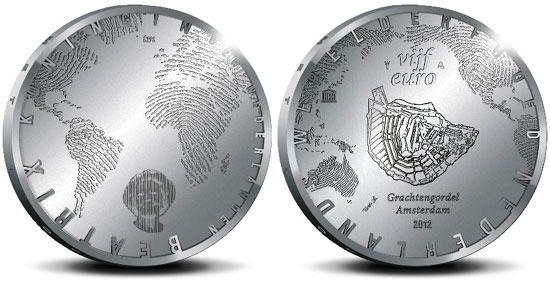 The two coins, which share the same design are the work of Dutch Artist Tine Melzer and are struck by the Royal Dutch Mint in Utrecht. Both include a front-facing cameo type portrait of HM Queen Beatrix on the obverse with a world map with the texture of fingerprints in the background as a matte layer on a mirror surface. The design is a symbol of the collective ownership of Dutch Heritage and a worldwide symbol of Dutch culture. The reverse also includes the other half of the world map as seen on the obverse, giving continuity to the design. The value (5 or Vijf EURO for the silver – 10 or Tien EURO for the gold) has been written out in words in order to feature the Dutch language. A rendition of the canal rings appear just below the value of the coin and the text “GRACHTENGORDEL AMSTERDAM” is seen below the rendition.  As the coin is also in conjunction with featuring UNESCO sites, the organization’s logo can be seen to the upper left portion on the reverse. The designer’s initials of “TM” can be seen on the obverse and towards the upper half. 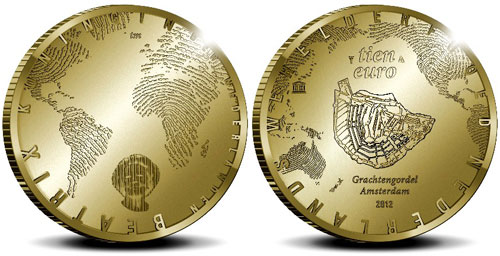 The Amsterdam Canal District 5 euro coin is the first issue in a new Dutch series of nine commemorative coins in total on the topic of Dutch Heritage beginning with this 2012 issue and will continue up to 2020. The first three themes are the Amsterdam Canals (2012), Rietveld Schröderhuis – Rietveld Schröder House for 2013 and the Kinderdijkse Molens – Mill in South Holland for 2014 which are also UNESCO world heritage sites. The first three coins in this new series will all be designed by Tine Melzer.

For further information on this and other coins offered by the Royal Dutch Mint, please visit their website at: http://www.knm.nl/Het-Grachtengordel-Vijfje-2012-Zilver-Proof/nl/product/2949/ The information is in Dutch – international orders fulfilled.