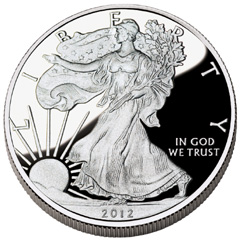 The United States Mint has provided the release date for a two coin set which will be issued to celebrate the 75th anniversary of the San Francisco Mint at its current location. This set will contain two special American Silver Eagles.

The first San Francisco Mint opened in 1854 in response to the needs created by the California Gold Rush. By the end of the first year of operations, it had produced more than $4 million in gold pieces. In 1874, the Mint was moved to a larger facility with walls of stone. This came to be known as the “Granite Lady” and survived the 1906 San Francisco earthquake and fire. The San Francisco Mint moved to a more modern facility in 1937.

Preliminary details provided by the US Mint indicate that the set will contain one 2012-S Proof Silver Eagle and one 2012-S Reverse Proof Silver Eagle. The first coin will be different than the standard proof version since it will carry the “S” mint mark, rather than the “W” mint mark. The second coin will feature a reverse proof finish, with mirrored raised design elements and frosted background fields, or the opposite of the standard proof finish.

Based on information posted on the US Mint’s website, the 75th Anniversary San Francisco Silver Eagle Set will be released on June 7, 2012. The Mint is yet to provide information on the mintage limit, household ordering limits, or pricing.

Last year, a special 25th Anniversary Silver Eagle Set was offered which contained a standard proof coin, bullion coin, collectible uncirculated coins with the “W” and “S” mint mark, and a reverse proof coin with the “P” mint mark. This set was limited to 100,000 units with a household limit of five. Collectors pounced on the offering, resulting in a rapid sell out and instant premiums on the secondary market.

Some collectors were critical of the Mint’s handling of the offering, since they were unable to obtain a set. It seems likely that the Mint will attempt to avoid a similar situation for this year’s special offering by increasing the mintage limit and/or reducing household ordering limits.

Update: The US Mint has indicated that the sets will be available for four weeks from June 7, 2012 to July 5, 2012. The mintage will be determined based on orders received during this period.